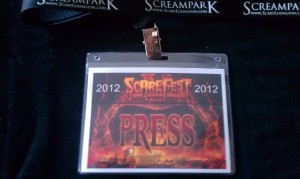 Per My Brother:
As a member of the ScareFest Media, I had great access to all the events and stars. The absolute highlight, for me, was to interview both Josh Gates and Chip Coffey. I’ve been a fan, of both, for years, and will continue for many more. 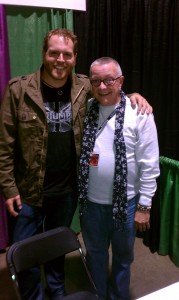 I really enjoyed the costumes and cosplayers who lurched about the convention floor. The Costume Ball, on Saturday night, was interesting, as usual. Held in a nearby convention center restaurant/bar, which made for interesting banter, mixing costumed characters with unsuspecting locals. I got some great pictures, alas, then I had a Droid battery fail (as usual, per conventions). Luckily, I had some photo assistance, by a fetching young Viking female. I hope to get her picture posted soon, also. Here, Jason cuts the ceremonial ribbon at the grand opening: 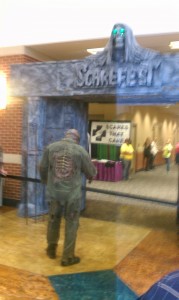 Which was followed by a great Thriller performance by a group of dancing young ladies from local charter school, SCAPA. (I hope to post the video soon.) 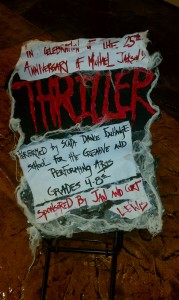 Unfortunately, there were a few cancelations of some big-named stars, which is understandable, considering their circumstances. But it did help me with my schedule-making decisions. Initially, there were going to be three main events happening simultaneously on Saturday night. With the cancelations, my decision was a bit easier to make. I experienced this same conflict among a couple of panels I really wanted to attend. I didn’t get to interview everyone I wanted, as well. Sometimes, that’s the breaks. I was hoping to squeeze in interviews with Denise Crosby, Tony Todd, Chandler Riggs, Nick Groff and Tyler Mane. Ah, next time! 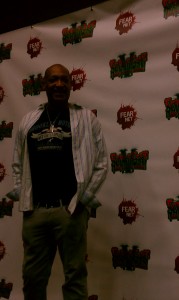 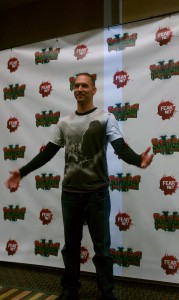 By the end of the weekend, I was exhausted and ready for a long… 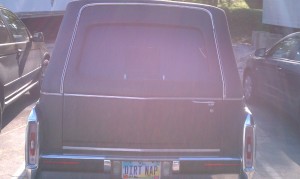 Even though I was tired, I enjoyed the convention immensely. I highly recommend this one to horror and paranormal fans, everywhere. Get ready for 2013! I heard ticket sales were somewhere north of 13,000 and next year promises to be even bigger and better! Hopefully, there will be a few more zombies in attendance! Maybe even a Make-Your-Own-Zombie makeup table setup at the convention! Ah, zombies. My favorite!