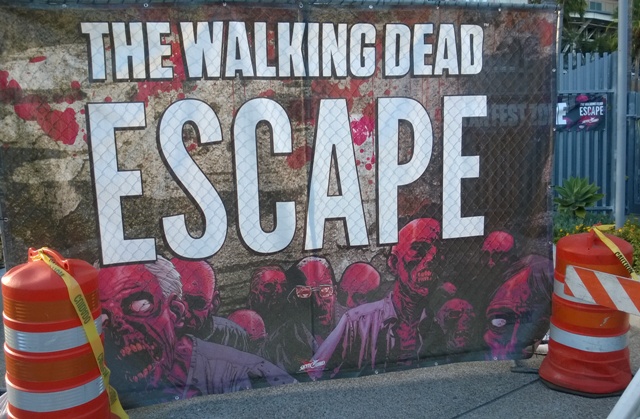 Per Matt
Once you enter The Walking Dead Escape, there’s no walking away!

At the top of my to-do list at San Diego Comic-Con this year was participating in The Walking Dead Escape. Part Zombie obstacle course, part immersive environment, survival is the main goal. With a variety of participation types (survivor, walker and spectator), it’s very fun for everyone!

In my interview with Skybound EXP President David Isaacs, we previewed the popular attraction and he gave tips on how to best enjoy the Escape experience. Once my wave was prepped to bug out (see what I did there?), the Zombie Apocalypse had begun. The first mistake people make is sprinting out of the gate. This generally creates mass confusion and sometimes people can get trampled. Good thing I took my time to enjoy the atmosphere a little bit, before taking off.

The storyline is obvious, but very fun. There’s been an outbreak. Zombies are everywhere. At one point, many of the undead are captured at the Zombie Evac Center… but then something goes terribly wrong and they escape, devouring every living creature in their wake. The majority of the walkers had great costumes (including a Prom Queen and brand-new bride) with impressive special-effects makeup (provided by Greg Nicotero’s KNB EFX, the same one on AMC’s The Walking Dead). I truly believe with Escape’s new management this year (Skybound EFX), the walkers and the overall environment looked the best I’ve seen the San Diego course in the three years I’ve attended this event.

Several of the noteworthy areas were a survivor camp, a minister preaching for salvation to the masses and a medical zone, where many people lost multiple limbs. The overall highlight was getting swallowed up by an extra-large undead crowd near the end of the course. This year, there were quite a few dead spots (pardon the pun), where survivors walked or ran through very-open areas (where obstacles like the rope bridge were placed last year, but removed this year). I would’ve preferred anything to have been there, instead of wide-open spaces. Other than that, the event was incredible! 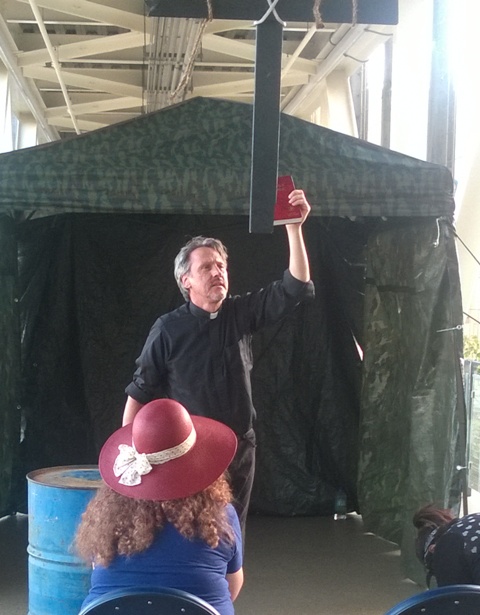 After completing the course, there was a fanfest set up to celebrate The Walking Dead. The party atmosphere was contagious (get it?), where trivia contests, a dunk tank, live music and undead go-go dancers kept the crowd excited. In fact, on Saturday, the San Diego Zombie Walk ended at the Escape, where there were even more walkers invading Petco Park. A walker dance off was also planned, which I would’ve loved to see, but I missed it. 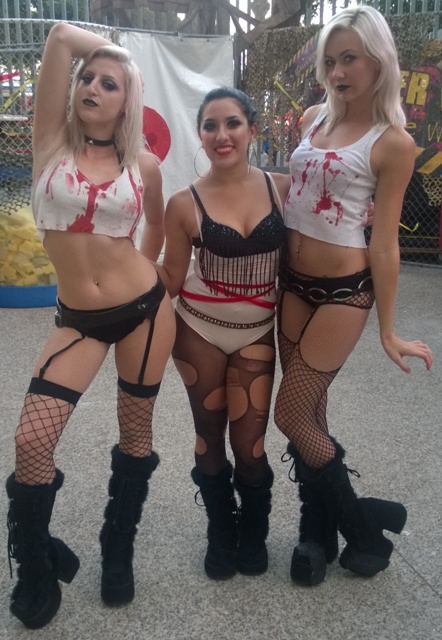 For three years in a row, I’ve absolutely enjoyed The Walking Dead Escape (even if I didn’t make it out unscathed). I’ve watched as it’s grown and gotten bigger and better each year and 2014 was a great year for Escape at San Diego Comic-Con. With so much to see and do during my week-long SDCC adventure, my only wish would be for Escape to be held for longer than two days. You’ve definitely got to plan carefully or you might just miss the best thing outside the convention center!

I look forward to attending Escape again next year at SDCC and hope to catch one of the Escape tour stops very soon, coming to a city near you!

For More Pictures of The Walking Dead Escape, please see our Facebook Page.