Tales from the Borderlands: Episode Five – The Vault of the Traveler 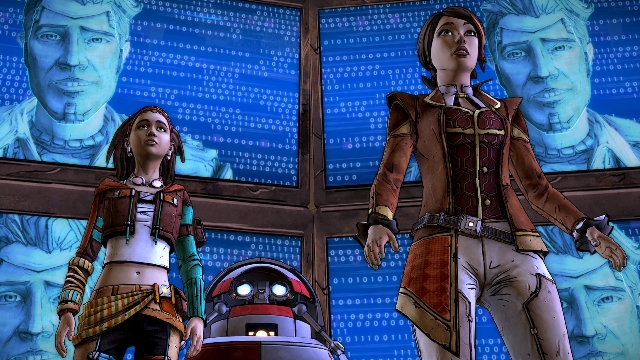 Per Matt
There’s plenty of surprises in store for Rhys, Fiona, Sasha and all the rest of the cast of characters as Tales from the Borderlands releases its season finale.

Season 1 of the point-and-click adventure video game concludes with Episode Five, The Vault of the Traveler, which picks up immediately after the events of the previous episode. Handsome Jack has double crossed Rhys and threatens to graft an endoskeleton robotic suit into his body, along with uploading his consciousness, thus, returning from the grave and effectively killing him. Fiona and Sasha have been captured by Yvette as they try to escape Hyperion and Gortys can’t believe the gang has become criminals (weren’t they always?). August arrives in the nick of time to help the crew escape, that is, before betraying them. Helios comes crashing down, key characters make huge sacrifices and Gortys summons the Vault of the Traveler… along with a huge Vault Guardian monster. After working on their own for so long, all of the characters must trust shaky alliances while working together, in order to reach the untold riches of the vault.

The emotional roller coaster throughout this episode, alone, takes a toll on the player, as the episode concludes. There are so many highs and lows while character arcs conclude and people seemingly die and later come back to life, the conclusion of the story almost feels like an afterthought. That’s not to say it’s unnecessary, but there’s a lot going on, here. It practically takes two playthroughs to soak it all in.

The top highlight of Tales from the Borderlands’ first season has got to be the villains. There are so many great ones here, it feels unfair to cheer on the heroes. Handsome Jack is just super crafty to escape Rhys’ virtual reality, but vengeance unfortunately seems to be a higher priority for him instead of securing his place in the real world. As the head of Hyperion, Hugo Vasquez unashamedly depicted corporate greed to the highest degree with pitch-perfect humor, sadly only surviving half of the season. Vallory’s role as a Gang Lord is never fully explored and somehow feels like a wasted opportunity, although her son, August, is ultimately offered a shot at redemption. And the Stranger doesn’t get much backstory, but plays his role perfectly as an unofficial narrator. There are also characters who previously played antagonists, that are given second chances (and sometimes, ultimately, second lives) to become allies, which feels natural in this storyline. The “good guys” are basically anti-heroes, but each one of them is easy to support, in their roles.

This episode is cram-packed with action, ultimately taking about two hours to complete. Each of the achievements/trophies are story based and unmissable.

Random Thoughts:
The Vault Guardian looks like something from the Halo franchise, there’s aliens tucked away inside a massive monster and a cool meta moment, where the characters you’re controlling are using a video game controller to win the battle… that’s inside a video game. The episode ends before the big reveal, meaning there will have to be a Season 2 to showcase its contents (as well as the ultimate conflict of divvying up the loot). I really enjoyed the final battle, where Player 1 must choose certain supporting characters to help complete the mission. This can only be done with those who you’re in good standing with, made from previous decisions throughout the season. Ultimately, this means the boss battle could be replayed multiple times, using different fighting styles to defeat the boss, with multiple character arrangements.

Although my favorite character — Hugo Vasquez — did not make an appearance in this episode, it was, by far, the best of the five episodes. I was really surprised how much I enjoyed the bad guys and the gameplay felt like a smashing success. What’s next for the series? Will there be a Season 2, which picks up after all of these events? Will the long-rumored Borderlands 3 finally get released before these characters get another adventure? Or will this series get a brief hiatus, while Telltale’s other franchises (The Wolf Among Us, The Walking Dead: Michonne, Minecraft: Story Mode) move into the spotlight? It’s all unclear, at this juncture. What is clear; however, is I’m a huge fan of this game. I can only hope the misadventures of Rhys et al. will be allowed to continue, sometime soon.

Strength: Great characters, storyline and action.
Weakness: The mysterious big reveal is still an unknown…
WTF Moment: Laser pointers: Is there anything they can’t do?