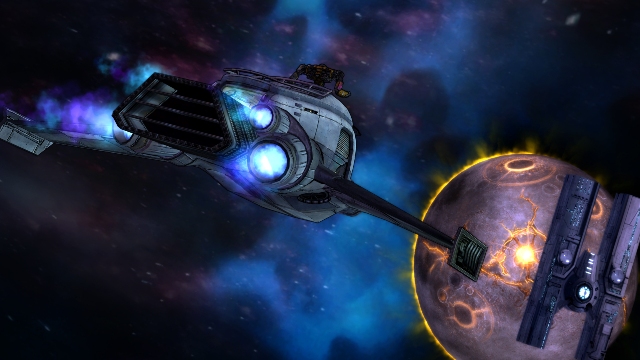 As the saying goes, “Power tends to corrupt and absolute power corrupts absolutely.” So, when Rhys makes a deal with the devil (aka the hologram ghost of Handsome Jack), there will be plenty of opportunities to throw shade at his former coworkers, while hunting for treasure.

In Tales from the Borderlands: Escape Plan Bravo, Rhys, Fiona and the rest of the Vault Hunters have made an uneasy pact with Vallory, searching for untold riches found in the Vault of the Traveler. Unfortunately for them, the Vault’s location constantly teleports throughout the universe. If only they had a beacon to lock onto the Vault’s location…

It just so happens that Handsome Jack previously owned such a beacon. And in order to summon the treasure, the gang must work together in order to acquire a space ship, fly to Helios, break into Handsome Jack’s former office and somehow escape in one piece. Just another crazy plan that becomes possible when Jack’s hologram guides Rhys through his old stomping ground. Will the unlikely heroes succeed with their harebrained scheme or will Handsome Jack’s evil ways return from beyond the grave and endanger them all? Find out by playing Episode Four.

As crazy as it sounds, this entire video-game episode has shades of Ocean’s Eleven that makes its fun quota very high. Whether you’re getting chased by psychos, dangling from a dangerous space walk, dealing with ungrateful friends, sneaking in through a trapdoor or trying to scam the company that unsuccessfully tried to kill you multiples in the past, being the antiheroes of this storyline is a blast. By its conclusion, I elected to rule Hyperion with an iron fist alongside Handsome Jack’s ghost and hopefully stick it to the man, while being “The Man” in the next episode. Evil is as evil does, right?

As usual, Handsome Jack has all the best one-liners. Dead or alive, he’s quite the character. Noteworthy hilarious situations include Fiona pretending to be a Hyperion tour guide and the make-believe gunfight Vasquez gets into with his accountants. Both are absolutely ridiculous and incredibly funny. This has been the most enjoyable episode to date. Can’t wait to see what’s in store for the season finale.

So far, all achievements/trophies for each episode have been story related and unmissable.

Oddly enough, at one point in the storyline, an important character is sacrificed without remotely considering lopping off his arm, in order to survive. I was caught off guard with this scenario, since Telltale has released The Walking Dead as a video game franchise. Preventative measures to survive the Zombie Apocalypse are just as dire as survival in or around Pandora. Surely the fine folks at Telltale could have figured out a way to help this character escape?

Strength: Video game heist in outer space. What more can you ask for?
Weakness: Is anybody truly good or evil in this game? Seems to be many shades of gray.
WTF Moment: Rhys attempts to save face with Vasquez in the most bizarre way possible.

Notable Quotes:
– “His face has no face.”
– “He does smell like ham.”
– “So this is Butt Stallion!”
– “Ain’t no adspace like outer space.”
– “You had one job and, well, you blew it.”
– “I know a bleeding statue when I see one.”
– “My Uncle always said, ‘Never open your mouth.'”
– “That’s it, go on, peel off that face like a serial killer.”
– “No one ever became a leader without dirtying their hands.”
– “The nerd is gone. Some old dude with crazy hair ran off with him.”
– “Looks like these psychos had themselves a little skin pizza party.”