Tales from the Borderlands: Episode Three – Catch a Ride 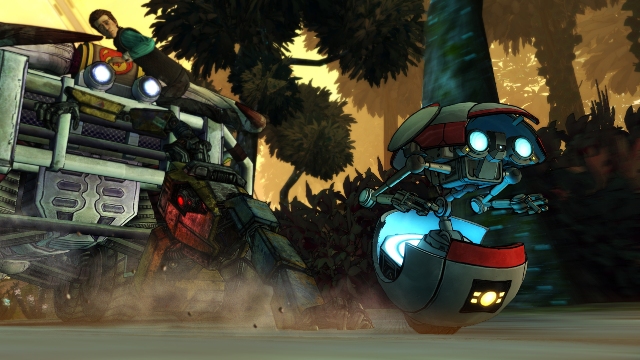 The life of a Vault Hunter is a hectic one, that’s for sure.

Tales from the Borderlands continues with Episode Three: Catch a Ride. Misfit Vault Hunters Rhys and Fiona have been captured by a mysterious bounty hunter (who wears a very cool mask, by the way), describing how they happened to land in their current predicament via flashbacks.

Previously, the crew discovered the Gortys Project — hoping it’ll lead to unknown Vault treasures — and got into a little trouble (yet again). After dodging heat-sensing turrets and escaping with the assistance of Loader Bot, a new nemesis makes her mighty presence felt. Vallory, the Queenpin, along with her henchmen, fight tooth and nail for Gortys (even though they have no idea what it is). In fact, once awakened, Gortys is a robot with a child-like personality, requiring a few upgrades before helping the good guys find the Vault of the Traveler.

Ex-Atlas assassin Athena, arrives with a Captain America-like energy shield, to save the day, revealing she’s been hired to mentor the crew into becoming credible Vault Hunters. The treasure-hunting expedition becomes a road trip, where the heroes search for Gortys’ missing upgrade. Teamwork and compromise seem to be the themes to this episode, and the ghost of Handsome Jack feels left out of the loop. But there’s not much time for warm fuzzies. Once the crew overcomes quite a few jungle obstacles, the Queenpin returns, and this time she’s deadly serious.

Although there’s no cliffhanger, everybody’s in rough shape when this episode ends. Player 1 is introduced to quite a few new characters in this episode; most of them are mercs on a mission. Full of action with a fast-paced story, this episode just flies along. Really didn’t think it was possible, but each episode seems to get better than the last!

Unfortunately, there were a couple of instances of gameplay that required multiple playthroughs, due to timing issues. There were also a couple of painful quick time events that needed to be replayed several times, but other than that, this episode is spotless. Also: Beware the partially hidden bowl of fruit!

All of the related achievements/trophies are story-based and unmissable. Enjoy the story. This episode feels like it’s the best one, so far.

Out of the blue, Tales from the Borderlands keeps creating multiple great bosses to battle. That’s some good writing and character creation!

How much longer until Episode Four gets released? The suspense is killing me!

Strength: Great balance of storyline and action.
Weakness: Poorly timed-based actions are minor complaints.
WTF Moment: Be on the lookout for the Borderlands board game Easter Egg!

Notable Quotes:
– “Greeting denied.”
– “We are excited.”
– “But I like my hat…”
– “You are so bad at conversation.”
– “I’ll stay here and look after the ball.”
– “Here comes the Pain Train! WOO WOO!”
– “Jack is only slightly less nuts than she is.”
– “Who could forget a messed-up face like that?”
– “I cannot hold back your tide of bad decisions.”
– “Listen, you’re probably going to die, you know, right?”
– “Look around, twice, anxiously if you’re still breathing.”
– “This is easily the most annoying contract I have ever taken.”