William Shakespeare’s The Phantom of Menace 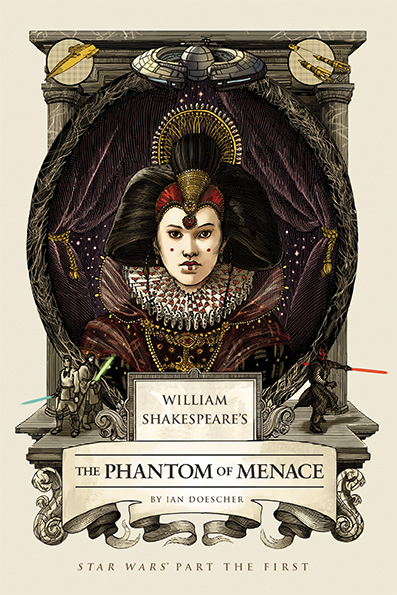 Per Matt
How could Quirk Books actually make Episode 1 lots of fun?
Verily beseech author Ian Doescher, to get the job done.
William Shakespeare’s The Phantom of Menace barely makes it look hard,
Retelling George Lucas’ story, through the eyes of The Bard.

This epic space opera is boldly told,
In a galaxy far, far away, that is quite old.
‘Tis quite a mistake, inserting politics into the prequel,
An interplanetary trade dispute that bores everyone equal.

Negotiations stall between the Trade Federation and Jedi,
Per Queen Amidala’s decree, all flee the planet, rather die.
Noble Jedi Master Qui-Gon Jinn leads her royal crew,
Out to Tatooine, with nothing to do.
Young Anakin is discovered and used as trade bait,
Displaying powers of the Force by winning the podrace.

Darth Maul arrives, looking for a fight,
Alas the good guys escape, ever taking flight.
Gullible Amidala seeks help from the Galactic Senate,
Playing into Palpatine’s plan, who’s In It to Win It.

Gungans and Naboo unite via Jar Jar Binks,
Uniting a Battlefront, both seeking peace.
The grand battle, ultimately, the Jedi win,
With some Forceful help by lil Anakin.

Seeking revenge, Qui-Gon does fall,
Losing a duel with Darth Maul.
Exeunt the Zabrak as Obi-Wan proves his might,
Taking in a Padawan, to teach what is right.

When it comes to George Lucas, there is no equal,
Wrapping a movie, prepping for the sequel.
This pop-culture mashup shall go very far,
Highlighting all that is right with Star Wars.

Noble author, Doescher, expands the story,
Including new characters with much glory.
Into the Extended Universe, no problem, no worry.

This complex version of Jar-Jar is far superior,
Highlighting his intelligence, feigning inferior.
More than a few background characters receive the spotlight,
Many lines of dialogue they speak, ’tis not quite right.
Mayhap the cadence of Qui-Gon’s dialogue, reminiscent of Yoda,
Captain Panaka quoteth old-school lyrics, fresher than a new can of soda.
Youngling Kitster, of Rebel Force Radio fame,
Shares the spotlight with Darth Maul, who seemeth far too vain.

Forsooth, the Sith grow stronger, ’tis an idea hideous,
‘Twill be clear as day when he arriveth, that of Darth Sidious.
Two more prequels remain, mayhap read them anon,
Deserveth this treatment, they do, which is quite fun.
What shall Quirk follow, with the next treatment, believeth I?
Wherefore, Star Wars: Death Troopers, that’s Zombies and Jedi!

Notable Quotes:
– “O, how roguish is this one!”
– “Alack, this doth not compute!”
– “What seeds of bitterness the Jedi sow.”
– “I have a feeling bad about this, Master.”
– “Tis as if some evil is arising in our midst.”
– “We have no assets: trouble’s all we own.”
– “Like evil thoughts these droids do multiply.”
– “Attend — a phantom menace comes anon!”
– “The course of justice never did run smooth.”
– “Why do we worship at the shrine of change?”
– “This crucial podrace shall prove bust or best.”
– “The deal is yours – and may we have success!”
– “That thou canst speak doth not yet make thee wise.”
– “This has not been a day made for the warmth of hospitality.”
– “These droids are no more frightening than if they were toys.”
– “A bounty of fear is present in thy spirit. Fear beyond measure.”