The Curse of Civil War Gold Dives to New Depths 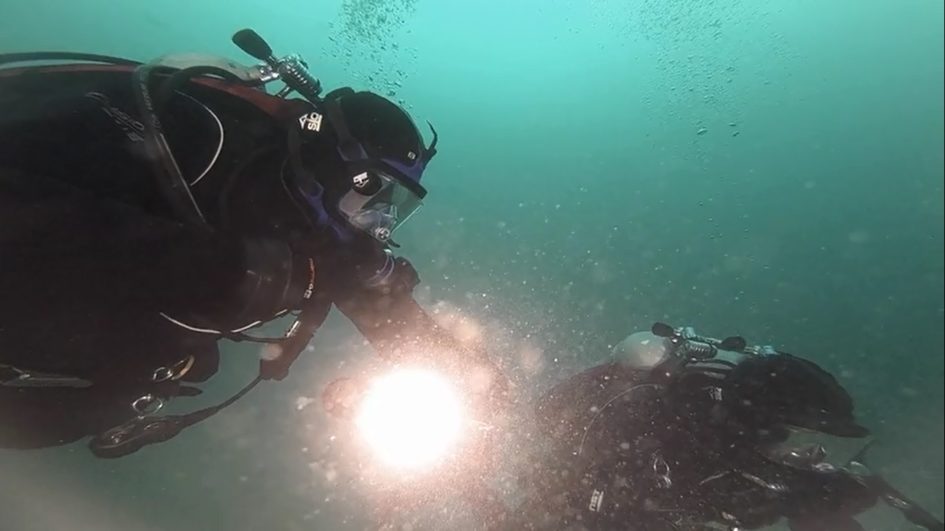 The Curse of Civil War Gold dives to new depths in the season finale, "It Ain't Over 'Til It's Overboard." Photo Courtesy: History.

All that glitters is not gold, as big discoveries are found and the race against time and foul weather close out Season 2 of The Curse of Civil War Gold.

Unfortunately, the discoveries aren’t always full of good news, but that’s to be expected whenever watching treasure-hunting reality shows like Civil War Gold, The Curse of Oak Island and Lost Gold of World War II.

After eight years of research, all clues have led Kevin Dykstra and his team to a certain set of GPS coordinates that point to the bottom of Lake Michigan, but in the season finale, “It Ain’t Over ‘Til It’s Overboard,” the crew brings in professional divers John Chatterton and Howard Ehrenberg to get to the bottom of it all. After searching an area covering roughly 31,000 square feet, they finally found what they were looking for… except it was only fool’s gold. More than a mile from shore, the divers actually found gold-painted bricks underwater — not bars of solid gold — which brings up so many unanswered questions.

Is there really a treasure-hunting rival out there, somewhere, who wants to pull the team off the correct trail in order to find the loot themselves? Did the team create unknown enemies by revealing a possible conspiracy that goes back all the way to the U.S. Civil War? Perhaps the treasure was found years ago and was replaced? Maybe it was all a hoax?

Such is the dilemma when watching reality TV. You never quite know what is “true” and what is staged. I mean, this is supposed to be real history we’re dealing with, right?

Regardless, the search goes on for the team, but much like Oak Island, it feels like circumstantial evidence is the only thing that’s ever revealed. And when there’s some sort of sonar and photographic evidence, it’s then discovered the team’s GPS coordinates were not entirely accurate, taking the divers to a totally different location. Until something is actually recovered, shows like this are all about the journey and less about answering an unsolved mystery. But History sure has cashed in on the process.

Naturally, at the conclusion of the episode, the crew has FINALLY received their permit from the Army Corps of Civil Engineers to excavate underwater, although bad weather will force the team to wait until next year to use it. To be continued in Season 3.

So, where are we, as Civil War Gold wraps up Season 2? Not all the dots are connected as more data is needed to complete multiple storylines that may or may not lead to a long-lost treasure. Secrets are seemingly still being guarded and sabotage could be a possibility (or at least that’s what the network wants you to think) when dealing with a $140 million prize that could be waiting out there for someone to find. And just when the team thinks they’re getting closer to the truth, they can’t pinpoint the exact area they just visited the previous day. But what if the 100-year-old deathbed confession was never actually real? That’s a lot of drama.

With two seasons of evidence gathering under their belts, Dykstra and his team can thank History for its endless repeats on basic cable to rouse up interest, even if it has led to some resistance to uncovering the truth. Honestly, I may be more interested in the actual backstories and conspiracy theories than the team actually finding the treasure. I suppose I can look forward to next season to get more of each element, as the story continues to unfold.