The Bogeyman Visits Blumhouse’s House on the Bayou 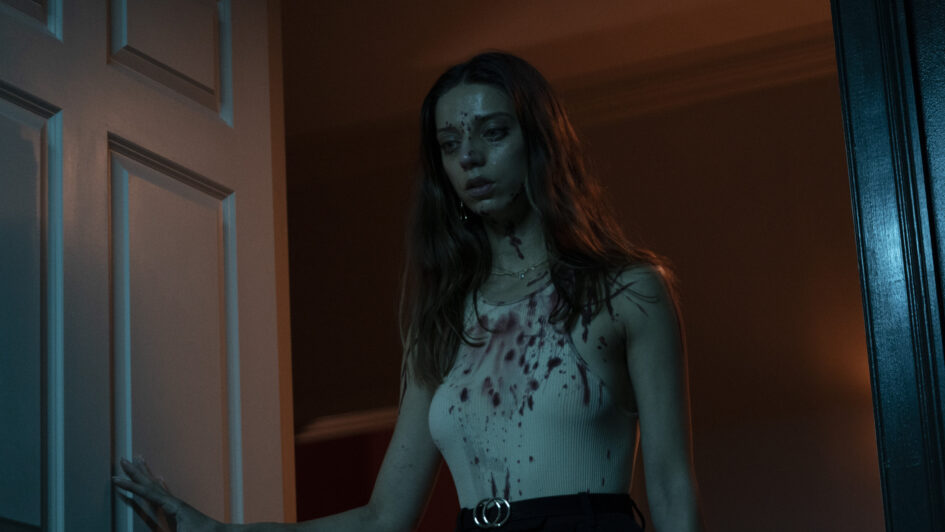 Angela Sarafyan isn't afraid to get a little dirty to settle her family's problems in A House on the Bayou. Photo Courtesy: Blumhouse Productions.

Per Matt
Beware the bogeyman: He (or she) may appear wearing any imaginable disguise at the most inopportune moments. Up to no good, you’d better think fast on your feet when dealing with this menace, especially when there’s no neighbors nearby to help for miles…  Blumhouse Productions brings A House on the Bayou to EPIX, which premieres on Friday, November 19th.

After catching her husband (played by Paul Schneider) cheating with a college co-ed, Jessica Chambers (Angela Sarafyan) makes a non-negotiable list of demands: They’re not breaking up, the affair must stop, their child can never know about it and the family WILL go on a vacation together in order to settle the simmering vibes. Little did they know their unexpected guests would create so much drama.

In the middle of nowhere on the Louisiana bay, the Chambers family hopes to reconnect. A plantation estate home is soon up for sale and Jessica gets a good deal to temporarily rent it out before it goes onto the market. Just when things look their brightest, the bogeyman approaches in the form of local teenager, Isaac (Jacob Lofland). He and his “Grandpappy” welcome the strangers by making them dinner. But once you invite the devil in, he digs up all sorts of hidden secrets to use against you…

Apparently, when a person does bad things, a door opens — one which would not ordinarily offer up life possibilities. How far that person will go following their bad instincts will also lead them down the wrong path. Our bogeyman really makes his presence felt once you’ve past the point of no return.

A House on the Bayou is a family drama with shades of supernatural shenanigans. I really enjoyed watching Sarafyan’s reactions to her constantly changing environment, one which threatened the existence of her still-thriving family. The foreboding music was great and certain cinematography elements reminded me of specific Welcome to the Blumhouse films.

I enjoyed the horror elements of the storyline, which felt like it was inspired by an episode of Tales From the Crypt or even The Twilight Zone. That’s not a bad thing, as I’m a lifelong fan of both series, fed a steady diet of both while growing up.

The house of horrors really seems to be on a roll lately, first bringing another type of bogeyman to the big screen (Halloween Kills) and previous Blumhouse releases on EPIX include the Fall River documentary and The Deep House. The production studio feels right at home on the premium cable network. That’s a good thing, because Blumhouse will release six more films for the channel in the not-too-distant future. I can’t wait to see them all!

A House on the Bayou unlocks a deep mystery to the Chambers family, along with a mysterious locked door found within the house. What kind of answers will they find when they’re finally opened?

Find out this Friday, only on EPIX.