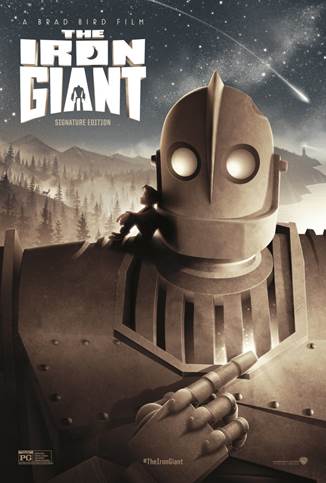 Per Matt
If you would have told me 16 years ago that a writer-director-artist from The Simpsons who would eventually win multiple Oscars was teaming up with the voice talent of Vin Diesel (Guardians of the Galaxy), Jennifer Aniston (Hercules), Harry Connick Jr. (Independence Day) and John Mahoney (Antz) for an incredible animated sci-fi tale, I would have predicted it would bring in box-office gold. Sadly, that was never the case and many people missed out on this gem.

If The Iron Giant was originally released today, history would have been rewritten. Luckily, it is getting a limited rerelease that includes a couple of improvements: Two new scenes are included and it’s been remastered as well, ahead of its Blu-Ray release.

The Iron Giant: Signature Edition depicts the tale of young boy, Hogarth Hughes (voiced by Eli Marienthal), who befriends a mysterious 50-foot robot (Vin Diesel) that has arrived from outer space. Set during the Cold War at a small town in Maine, once the locals discover the Iron Giant, paranoia breaks out. With the help of his beatnik friend (Harry Connick Jr.) and mother (Jennifer Aniston), Hogarth helps impart humanity to the metallic creature and teach acceptance to his neighbors.

The titular character has a childlike curiosity that is incredibly infectious. As an audience member, it’s easy to root for the robot’s success. The Signature Edition features two new scenes that add 10 minutes to its original running time. Both of the scenes were originally storyboarded by Brad Bird back in the day, but were cut due to time and budget constraints. One of the new scenes includes a nightmare by the robot, which also showcases a little of the character’s backstory.

Back in 1999, I was one of the few lucky critics to attend a media screening of The Iron Giant. I became an instant fan of Brad Bird back then, immediately purchasing the DVD when it became available and rewatching it many times. I have asked every one of my friends to give the movie a chance and many of those same friends agreed with my opinion of the flick. Originally, The Iron Giant won nine Annie awards and its popularity was later fueled by DVD sales and its airing on the Cartoon Network.

The Signature Edition includes an introduction by Writer-Director Brad Bird, as well as a sneak-peek into the soon-to-be-released documentary that airs after the film’s credits. Both featurettes will most likely appear on its Blu-Ray release. For a limited time, Fathom Events is rereleasing the Signature Edition. An encore event will take place in select markets on Sunday, October 4th at 12 noon local time. Rated PG for fantasy action violence, language, smoking and some thematic material, the movie is intended for children of all ages.

Strength: Incredible story depicted by an expert storyteller.
Weakness: There really isn’t one.
WTF Moment: Government Agent Kent Mansley works for the Bureau of Unexplained Phenomena. This character seems to be a Fox Mulder-MIB hybrid.