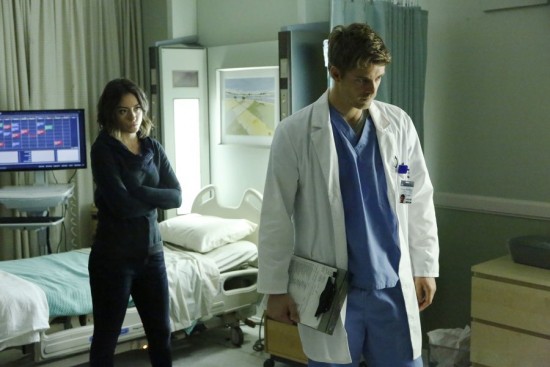 Agents of S.H.I.E.L.D. picks up the pieces from last year’s conclusion and attempts to move forward in Laws of Nature.

Season 3 begins with a bang, as new Inhumans are introduced. After ingesting fish oil that contained liquefied Terragin Mist, Joey has been given the super power to liquefy metal (his code should be Meltdown!). He is chased by a black-ops team before being captured by Skye (who now officially goes by the name Daisy). Coulson reveals this is the third Inhuman incident within the month — all taking place inside the intercontinental U.S. — although the good guys don’t have a clue who these new bad guys may be.

Hydra has gone silent, Coulson removes his robotic hand for no reason (other than shock value) and Fitz follows different leads on the Monolith, hoping to save Jemma. In Morocco, he acquires a 1,000 year-old scroll that supposedly gives details about the Monolith before stealing a getaway car that seemingly has its keys already in the ignition.

Lincoln Campbell, no longer working at Afterlife, is a doctor (we never knew that), working at a local hospital, hoping for a normal life. Daisy hopes he’ll return to S.H.I.E.L.D. in order to transition newly created Inhumans for the group. On the longest train ride ever, Coulson and Hunter are captured by the Mystery Woman, who goes by the name of Rosalind. As the leader of the Advanced Threat Containment Unit (ATCU), her special task force has been created to neutralize the Inhumans and will clearly play the main antagonist for this new season.

It’s later revealed:
– The outbreak is now worldwide
– The scroll depicts the Monolith as “death.”
– Ant-Man gets a shout-out
– Melinda May left for a long-overdue vacation and never returned
– Jemma is considered MIA

As the episode concludes, Jemma is indeed still alive. Shown in a far-away land, she’s running for her life, chased by an unknown predator.

S.H.I.E.L.D. now has a couple of cool transportation options: A new-and-improved larger aircraft, along with a mid-air transport that arrives within seconds of summoning it. The best new character of the episode is clearly Lash, a super-powerful evil Inhuman who can possibly summon and manipulate energy at his will. As in seasons past, we really enjoy certain evil characters who never seem to live very long on the series, so we’ll try not to become super fanboys and fangirls too much, but why can’t S.H.I.E.L.D. write great bad guys (and girls) who will survive more than one season?

Strength: Great new characters introduced in a nonstop episode.
Weakness: Skye has too many names. Can we focus on one, please?
WTF Moment: Looks like Coulson’s petrified hand is on display in the lab for everyone to see. Somehow it wasn’t destroyed and may later get reattached.

Notable Quotes:
– “I’m not a freaking Ted Talk.”
– “Only love can make a man so stupid.”
– “This metamorphosis is becoming less rare.”
– “We need that big brain of yours and that heart, here.”
– “You’ve experienced what’s called a bio-morphic event.”
– “The world’s been a little twitchy since Sokovia fell from the sky.”