The Strangers Prey at Night in My Guilty Pleasure 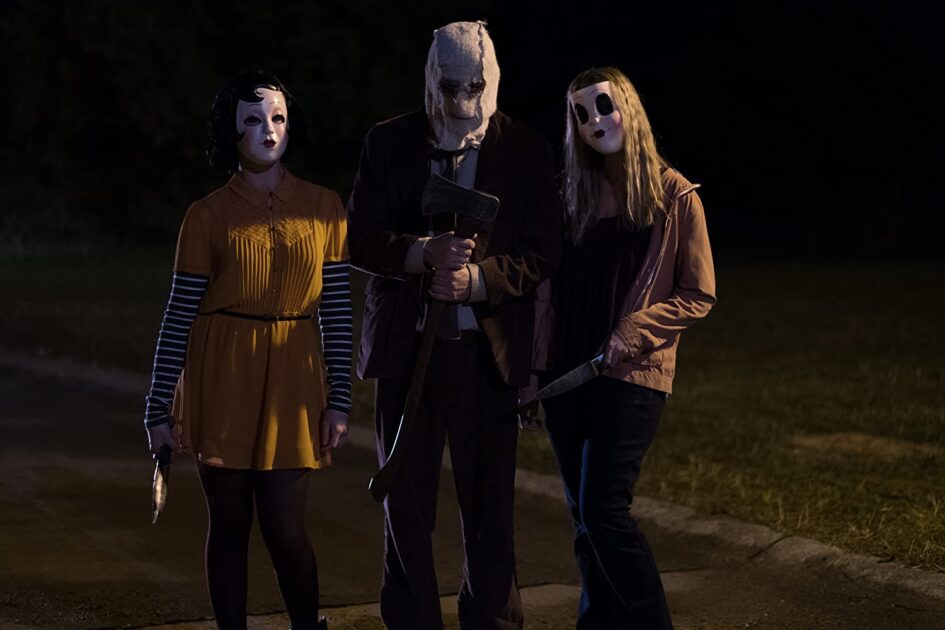 Per Matt
The ’80s will never die. Long live the ’80s! Director Johannes Roberts seemingly agreed with that statement, as his feature film, The Strangers: Prey at Night, much like so many other killer releases today, owe way too much to previous productions of the Neon Decade… especially when dealing with deadly situations.  And then there’s the whole sequel aspect. Gather ’round, my friends. Let’s discuss My Guilty Pleasure.

Although it’s been quite a while since I last watched The Strangers in a movie theater (remember that?) way back in 2008, I did remember its story had masked villains. But the thing that stuck out in my mind was how much I disliked Liv Tyler’s character so much. And not just a little bit. I’m really not a fan of the actress (if you can actually call her that), so that belief clearly bled over into her role. (As a side note, I basically ignored her parts as an elf embedded within Middle Earth, as so much of it was only created for the big screen, but I digress.) All the while, I was cheering for the bad guys to put her — but mostly ME — out of her misery in that movie. Clearly, I was NOT a fan of its conclusion. Obviously. That’s why I wasn’t in too much of a hurry to watch the sequel. After waiting 12 whole years, I guess it was finally time to return to the franchise.

Without looking anything up, I watched the film, trying to remember if this was a sequel or a remake. It really didn’t matter either way, as there were elements that made it feel like it could’ve been both. Prey at Night deals with a dysfunctional family who wanders into a trailer park murder spree. OK, this theme immediately grabbed my attention. But when I see “based on true events,” all of that goodwill goes right out the door, as Hollywood always seems to embellish these types of stories. As usual, the truth’s stranger than fiction, which always makes for better stories…

After watching Prey, I decided to re-educate myself. The first Strangers is generally believed to be a remake of a French film due to incredible similarities, although it is credited as being based on a combination of actual events from the director’s life (with elements of the Manson Family murders and the Keddie Cabin Murders thrown in for good measure). The sequel is supposedly also based on actual events from the director’s life, although it’s more general and less specific.

True evil comes in all shapes and sizes. Enter Christina Hendricks and Martin Henderson, who are  not exactly ideal candidates for parents of the year to two teenagers. On a road trip to visit family members in a rural area, they eventually discover more than they bargained for. With no great fight-or-flight spider sense, they are dispatched rather quickly by a trio of silent-but-deadly killers. These mysterious characters are much more interesting than the rather generic hero characters, who are full of stereotypical tropes.

The Strangers: Prey at Night is definitely a nostalgic throwback to slashers of yore, as there are many references made in homage to greater films (most released in the ’70s and, you guessed it, in the ’80s). Incorporating home invasion and isolation horror, cheesy ’80s music is the true terror of this film, as well as the thinly developed characters. Since I wasn’t already a fan of the musical selections, I thought they were absolutely perfect choices to play throughout. They define scary. While there’s no true “final girl” survivor, the conclusion was satisfactory, much like the rest of the movie. It definitely passes for decent background noise.

Tune in for more Guilty Pleasures, which will be posted throughout the month, leading up to Halloween!