The Walking Dead: This Sorrowful Life 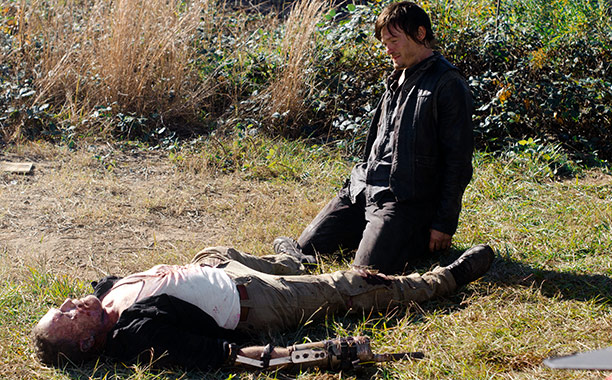 Someone’s got a secret…

In This Sorrowful Life, Rick still thinks he can call a truce with The Governor, but he doesn’t want to reveal his plan to everyone, just yet. Merle is honored to be a part of the Inner Circle.

Rick’s Gang attempts to set some traps for the impending invasion of The Prison, while Carol bonds with Merle. Daryl hopes for Merle to reconcile with Glenn, but he wants nothing of it. Hershel offers the Good Word, and when he mentions “The Wicked,” Lori’s ghost appears. Nice touch.

Rick drops his peace treaty, but apparently he didn’t mention it to Merle. After knocking out and kidnapping Michonne, Merle hopes to offer her up to The Governor and for a small slice of peace and acceptance by Daryl.

Glenn tells Hershel of his plans to marry Maggie, and he gives his blessing. When he breaks into a parked car, Merle sets off the car’s alarm, and all Hell breaks loose. Michonne must fend for herself while being all tied up with nowhere to go. Merle makes enough racket for a whole herd of walkers before they escape.

On the road, Michonne actually relates to Merle, about being on the outside of Rick’s Gang. In fact, in her brief discussion with Merle, she has more dialogue in those few minutes than all of the entire season! That’s a good thing. She needs more screentime.

And with his first selfless action, ever, Merle releases Michonne to do a solo task. At that very moment, his heart actually grew three times larger.

As he arrives to Woodbury with stereo cranked aloud, Merle occupies weakens The Governor’s ranks with some revenge, almost taking out The Governor before getting beaten down. In fact, The Governor bites off a little more than he can chew, when he bites off a couple of Merle’s fingers during the scrum! And with one fateful bullet, yet another life is taken by The Governor.

This was, by all means, the essential Merle Episode. And not one peep from Andrea. It’s a win-win scenario!

Rest In Peace, Merle. Although you were confused as to your allegiance, you were always Daryl’s brother. It’s a shame he’s no longer one of the “Good Guys.” I enjoyed hating him for all the wrong reasons. I wish his character could’ve stuck around a bit longer and gotten underneath the skin of the Rick’s Gang a little more.

The most recent issue of Rolling Stone magazine mentioned 29 characters would meet their demise by season’s end, plus I’d accidentally read a spoiler that Merle might die in this episode. I knew this was coming, but it’s gonna get a whole lot messier in the Season Finale! That’s just one episode away!

Strength: All Merle, all the time!
Weakness: As soon as we focus on Merle for an entire episode, he’s killed off.
WTF Moment: Finding liquor during the zombie apocalypse is harder than it might seem.

Notable Quotes:
– “You’re cold as ice, Officer Friendly.”
– “It’s not time to do shots… it’s time to pick a damn side.”
– “Do you even possess a pair of balls, Little Brother?”
– “You gotta play the hand you got dealt… I only got one.”
– “I’m not your Governor.”
– “Merle comes in and Asskicker, and goes out and Asskicker.”