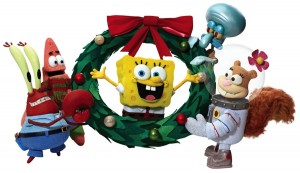 In the spirit of the Rankin/Bass stop-motion holiday specials of years past, It’s a SpongeBob Christmas! arrives as a holiday classic for a new generation. Clearly inspired by Rudolph the Red-Nosed Reindeer, mixed with a dash of How the Grinch Stole Christmas and The Nightmare Before Christmas, this TV special puts a new spin on the old-school tale.

In this SpongeBob tale, Plankton devises the ultimate plan: distribute jerktonium among all the inhabitants of Bikini Bottom via free fruitcakes. All of their evil deeds will make him look like an angel, in comparison, and will end his nonstop streak of receiving coal in his stocking. Those evil plans go awry when he realizes SpongeBob is immune to jerktonium, due to his tiny brain and his pure heart (full of the Christmas spirit). In fact, SpongeBob sings “Don’t Be A Jerk (It’s Christmas)” and breaks the spell of everyone in Bikini Bottom. This singular song gives me the giggles. I’ve listened to it at least 100 times since receiving the SpongeBob Album (My musical review is here) and it’s the highlight of the CD as well as the TV special. The other songs are good, but this one, in particular, is great!

My only complaint lies with the Patchy the Pirate segments. While he remains a secondary character, similar to the Narrator’s role in the older Christmas classics, his segments felt a bit like filler material. They don’t really influence the episode one way or another, so they probably should’ve been left out (and added another chorus of Don’t Be A Jerk). This is the second SpongeBob Christmas special to air (Christmas Who? was the other), and it originally aired exactly 12 years to the day that Christmas Who? premiered on Nickelodeon. 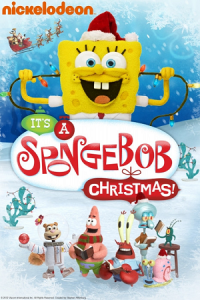 SpongeBob voice actor Tom Kenny was very excited about this Christmas special and CD, which he shares the co-writing credit with Andy Paley as song writer. He even performed music with the rest of the cast, in live concerts, promoting this recently released CD. All of that and more is included in our exclusive interview with Tom Kenny while he was visiting the Memphis Comic and Fantasy Convention.

I hope Tom Kenny continues to enjoy his role as SpongeBob, because he clearly loves the musical aspect of the character. In fact, I hope this CD sells well on iTunes and Amazon, because I’d love for the full cast to do an entire musical episode in the near future! That would be much better than barnacles… it would be super songtastic!

Strength: SpongeBob in stop-motion animation is a retro splash of holiday fun.
Weakness: Patchy’s Frosty filler role.
WTF Moment: When do we get a full-length non-stop musical episode of SpongeBob?

Notable Quotes:
– “I will trap Santa in my box, locked up like Fort Knox, and make him stop the clocks.”
– “Ah, go stuff a stocking!”
– “Jerktonium is the orneriest element of them all.”
– “Tis the season to be jolly, not jerky.”