The Walking Dead Reaches Out To Critics 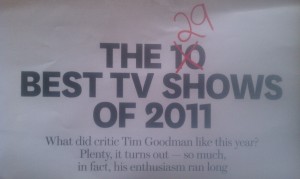 The Walking Dead appears everywhere you look. As the award-show season winds down, AMC’s hit show keeps creeping onto the critic’s Best Of 2011 list.

While the show was not nominated for any awards by the Hollywood Foreign Press at the 2012 Golden Globes and by the actors of the SAG Awards show, The Walking Dead has reached out to make a few critics’ list for Best TV Shows of 2011.

While I eagerly read them in various formats, I managed to only save one (I apologize).

Case in point, The Hollywood Reporter listed it as the No. 8 show under the Drama Category.

“Anybody can make a zombie movie. It’s a lot harder to make an ongoing television series because you can only explode the heads of the undead so many times before you run out of tricks. The hook here is that Walking Dead is less about the dead (or undead) and more about the living. This series brought introspection to a genre that has over-relied on being a gorefest.”

With the Season Two Midseason Premiere airing on February 12, there’s still plenty of undead action to appear this year. Here’s to aiming for the stars at next year’s award shows.