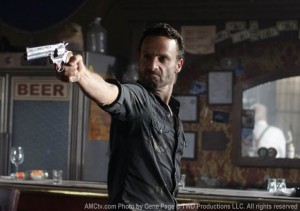 Returning to the scene of the crime… after a prolonged delay, now there’s hell to pay!

Glenn’s emotionally tounge-tied. Bad-Ass Daryl is back. Shane’s ready to jump ship. Herschel’s on the lam. This is Paradise Lost… in the Land of the Damned.

Once safe, the eye-of-the-storm is deteriorating right in front of us. The danger is also the one thing holding these characters together: the fragile human spirit. Flight or flight, these characters will either figure out a way to live together, or die trying. The haunting background music was chilling and sad, hopefully there’s more where this came from. Almost sounds like Mark Snow, who composed music for The X-Files and Millennium. Although there’s not enough, it is much appreciated.

Half-way through season two, I like the character development of Glenn, Maggie and Dale. Shane’s a little predictable in is unpredictable-ness. Andrea is inching toward becoming a bad-ass, but for the female characters as a whole: a little less of the crying, woe-is-me characters. We need more rugged characters, including women. Please.

The bit where a zombie lost an arm en route to the burnpile was classic. Lookin’ for more.

Ft. Bening is supposedly lost to the zombie hordes. Nebraska is a possible future destination, full of farmland and few humans (and dead) to interact with.

Walking into the bar, two new characters are introduced: Dave and Tony. Survivors of Philadelphia. Dave speaks proper English. Tommy’s a college drop-out. Live outta their cars. May be trouble. Could be spies. And then the unexpected Mexican stand-off. Almost sounds like a bad joke.

This series was treading water, dangerously close to mediocrcrity. This episode was the much-needed shot of adrenaline it needed. Now, let’s see if we can resurrect the remainder of the season.

Episode Strength: Lots of action, moving the previously plodding story arc along.
Episode Weakness: Sorry, newcomers. We hardly knew ye!
WTF Moment: New Survivors! But only for a minute! Surely, there’s more where that came from!

Noteworthy Quotes:
– “Betchya window shopping. You want them, go fetch them yourself.”
– “You people are like a plague!”
– “There is no hope, and you know it now. Like I do. Don’t you? There is no hope for any of us.”
– “I hate to piss in your Corn Flakes, officer, but we ran across a grunt who was stationed at Bening. Said the place is overrun by lamebrains.”
– “Oddly, truth is: There is no way out of this mess.”
– “Walkers? That what you call them? That’s good. I like that better than lamebrains.”