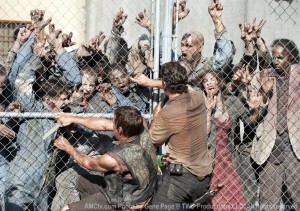 Season Three Starts with SPOILERS!
And we’re off! Season Three starts with the remainder of the gang busting into houses, seeking food, supplies and shelter.

Carl’s got a gun with a silencer… and really long hair! Lori’s about to burst with another baby and Hershel’s looking haggard. There’s no telling when the cold intro happens, in regard to the Season Two finale, but it’s done brilliantly, with no lines of dialogue whatsoever. Reminds me of the brilliant Marvel G.I.Joe comic book, “Silent Interlude.”

After the commercial break, the gang has infiltrated the prison. And they are happy. After securing the prison, the gang sits ’round the campfire. The lone remaining background character is Bessie, one of Hershel’s daughters, who sings a tune, with sister Maggie. This feels like an introduction before her death.

Soon afterward, the hunters search the prison for supplies, using hand-to-hand combat to hold off the Walkers. The group has grown fierce, since leaving Hershel’s Farm, even the girls! And to top it off, they fight as a group, silently. Nice touch.

The armor from the zombified Prison Guards proves to be the first object to deflect Daryl’s arrows in the entire show. But with the group fighting together, even they don’t last very long. One cell block of the prison is secured, and the group sleeps securely.

Michonne seems to run solo. And she’s very good at it. Only her, her katana sword and two chained Walkers. She’s a woman of action, and very few words. Since saving Andrea in the woods, the two have teamed together, but Andrea is sick and needs supplies…

Lori FINALLY realizes she’s been a bitch to her husband and son, and throws a pity party with Hershel. Boring. The hunters are playing the hunting-supplies game again. And as they search, in the dark, with flashlights, turning corners to find monsters, the show feels like it’s turning into The X-Files. Even the sound effects and music composer have an X-File edge. Somehow, the group is separated, so they must circle back. Searching for his lost daughter, Hershel gets bitten, and he’s now dead-meat. But instead of dying, like everyone else, Rick decides to lop off a third of his leg. Lotsa blood spews forth and there’s no reason, whatsoever, Hershel should survive. But for now, he lives. At the conclusion, we are introduced to other prison survivors in the cafeteria!

Episode Strength: Lots of action, with little dialogue to slow it down.
Episode Weakness: Michonne gets little to do or say, but new character Bessie sings a whole song?
WTF Moment: Who needs a leg? Without medication, bandages, or painkillers, Hershel takes it like a man.