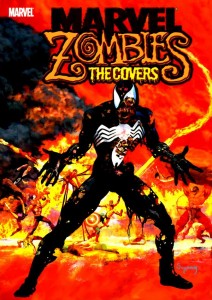 It’s always nice to open the packaging of a new book. Even nicer when it’s a hardback. And supremely sweet when it was purchased for $3 and it’s Marvel Zombies: The Covers!

I realize there’s not a whole lot to report on here, but as a fan of Marvel and zombies, and Marvel Zombies, naturally, I couldn’t go wrong.

As listed on the inside cover:
“Originally conceived by Mark Millar in the pages of Ultimate Fantastic Four, writer Robert Kirkman ran with the idea of a Marvel Universe overrun by a zombie infection to create one of the company’s most successful miniseries of all time. Commissioned to illustrate the miniseries’ five covers, Arthur Suydam looked to classic Marvel images for inspiration. Suydam’s work transformed these familiar Marvel covers into grotesque visions of decaying flesh and dripping gore, superbly representing the gruesome tone of the horror miniseries. Nearly overnight, Suydam’s work sparked a collector’s frenzy, with devoted fans eagerly snapping up each new cover as the series went into multiple printings.”

So, basically, Arthur Suydam details the process of transforming iconic Marvel comic book covers into Marvel Zombies! And opposing pages display the original vs. his vision. It’s pretty interesting, actually. He had free reign to choose whichever covers he wanted, and to alter any superheroes in any way he deemed fit.

I truly appreciate his take on Captain America, The Fantastic Four and any cover with many characters interacting together (such as Secret Wars, X-Men, The Avengers). Spider-Man seems to be his favorite character though, but with the entire Marvel catalog at his disposal, I wish he would’ve chosen a few different secondary characters to illustrate.

Also included are multiple zombie variant covers of random Marvel comics, which the ’90s made popular for overproducing, en masse, as well as covers to the short-lived Marvel series, Tales of the Zombie and Zombie.

Strength: The devil is in details!
Weakness: Five Spider-Man covers, and placed in the background of many more!
WTF Moment: According to Suydam, Wolverine and Hulk are eyeball eaters!