The Walking Dead: Beside the Dying Fire 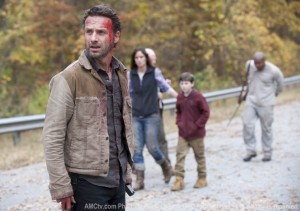 Boom! Goes the SPOILERS!
This episode gets a flashback to downtown Atlanta — being overrn by the undead hordes, natch — something which only happens near the beginning and end of each season. And now they’ve arrived, unwelcomed, to Hershel’s Farm, no more home to tranquility. This eye of the zombie storm has now become the home of pure destruction.

In a nod to George Romero, The Walking Dead employs New Rules to Become a Zombie: death, itself. Within moments of dying, it’s now possible to rise as a Walker. This Season Two Finale was written by Robert Kirkman and Glen Mazzara, so it’s sure to pack a meaningful punch.

Shane’s a traitor. And dead.

The characters’ fear is fully grasped by the viewer. The sheer violence and demolition derby aspect, mowing down the zombies, is a shot of adrenaline to the series (the slowish build-up has bogged down Season Two a bit). Hershel’s boy is bitten. And his girl. So, long. We hardly knew ya (I don’t even remember their names).
Andrea is left for dead (Get it? Left 4 Dead reference!).

The night shoot is a success (in more ways than one)! Glenn declares his love for Maggie. The gang is separated. They don’t really have a plan. And yet, most of them return to the traffic pileup. The carloads create a caravan, and off they go. Running on fumes, they hunker down for the night. Michonne makes a dramatic debut. And they’re all within walking distance to the prison. Bravo!

Well, color me impressed. By far, this is the best episode of the series! Comic creator Kirkman and Showrunner Mazzara have outdone themselves, setting the NEW standard of excellence. Can’t wait to see the new direction of Season Three.

Episode Strength: Violent deaths, and lotsa violence. Great cliffhanger ending.
Episode Weakness: The overall mythology is evolving. We get very little, in doses.
WTF Moment: Andrea? Andrea who? No one seems to remember her. Or go after her.

Notable Quotes:
– “You grow up country, you pick up a thing or two.”
– “I don’t know what happened, Rick. They just keep coming. It’s like a plague, they’re everywhere.”
– “Christ promised the resurrection of the dead. I just thought he had something, a little different, in mind.”
– “We’re all infected. Whatever it is, we all carry it.”
– “This isn’t a democracy, anymore.”
– “We’re literally shooting an epic zombie movie in eight days.” – Greg Nicotero