The Walking Dead to Ax Major Characters Next Season 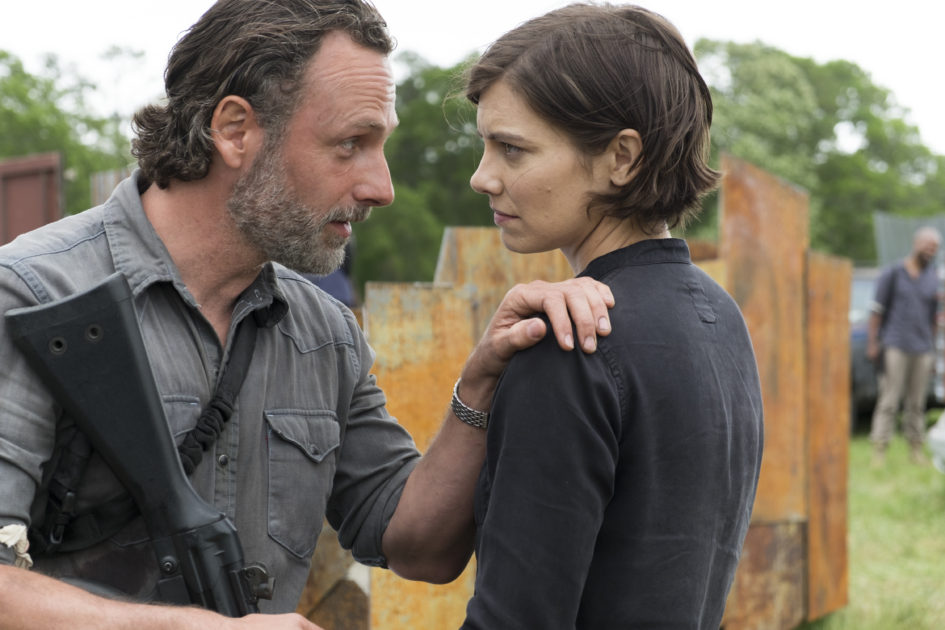 Here’s a doozy for ya: Next year will be the final one for two major characters in AMC’s The Walking Dead. While that may not initially seem like groundbreaking news, as characters are killed off with somewhat consistency when dealing with Zombies, the characters in question are the big news. That’s with a B-I-G!

While nothing has been confirmed by AMC or Skybound Entertainment, word on the street says Season 9 will be the last one for BOTH Rick Grimes (Andrew Lincoln) AND Maggie Rhee (Lauren Cohan). Good luck to new Showrunner Angela Kang, who begins her tenure as the boss of basic cable’s top-rated TV show. She must immediately maneuver the obstacles of writing off these mainstays of the show, while moving the overall storyline forward. And hope that the fans will stick around to see what happens next.

Unofficially, during recent contract negotiations, Cohan held out before eventually agreeing to a better deal. However, her return to the show will be short lived, as she will only appear in six episodes before reuniting with her father, her sister and husband Glenn at Hershel’s Farm in the sky. Cohan has also been cast as the lead actor in the pilot for Whiskey Cavalier, which ABC has picked up for a mid-season series.

The bigger news is that Lincoln, who has appeared in 116 episodes so far (practically all of them in eight seasons, minus a few) will be checking out. Granted, the current iteration of the show is most definitely NOT the same version that Creator Frank Darabont sold the actor on back in 2010, so it’s not totally shocking that the actor would like to work in different projects, but with so many defections taking place within the past few years both behind the scenes and in front of the camera, the actor has basically become the face of the entire series. He recently hinted that with the departure of his on-screen son, Carl, that his journey should probably end sooner rather than later (even though both still appear in the comics).

After the seeds of distrust were planted in last year’s season finale, once Negan was captured, Maggie sought vengeance while Rick hoped for a peaceful future (most definitely for Carl). But with both actors only returning for six episodes, we’re predicting there will be some sort of civil war splitting the Hilltop tenants and somehow, both characters will kill the other.

Comic book creator Robert Kirkman has moved his production studio to Amazon and left the series. 2019 will introduce the show’s fourth different showrunner. The writing room has seen a small exodus. A variety of actors have come and gone. Ratings have declined. Will the show’s diehard fans remain?

Daryl Dixon’s fans have spoken! Actor Norman Reedus received a hefty $20 million paycheck for the upcoming season, moving his redneck hunting character into the spotlight as the main character. For some reason, the leadership torch has been passed to Daryl, who has excelled as a dirty supporting character. Will this mean the Carol and Daryl relationship will reignite? Does this ultimately mean that TWD has finally jumped the undead shark? I guess we’ll soon find out when the Zombie Apocalypse returns later this fall!