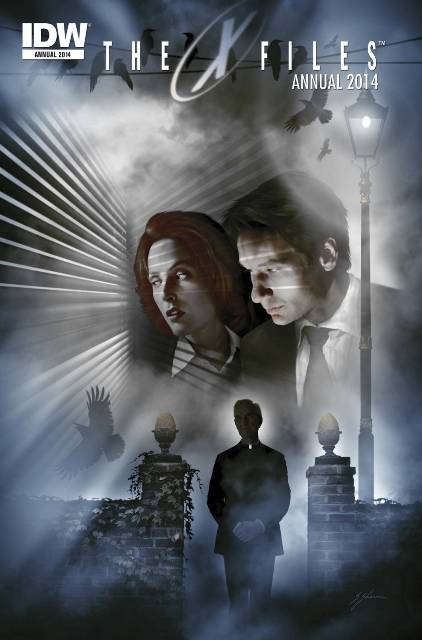 This offering, by IDW Comics, provides two unusual investigations to add to the unexplained mythos of The X-Files:

The Priest
After an unfortunate car accident, Wayne Gold passes away while trying to call his wife. But when his wife continues to receive strange phone calls by her recently deceased husband, are they pranks or are they possibly a confirmation of the afterlife? By the story’s conclusion, Mulder admits to believing in the afterlife, even though he’s not really a religious person.

Talk to the Hand
This one is very odd… even for The X-Files. How can it be described? Well, Scully’s dreaming throughout the entire story, talking to a mutant hand that embodies her high-school sweetheart. Mulder doesn’t make an appearance (which might be a first for an X-Files comic). Apparently, Scully has this dream every night. She must choose between reuniting with her first love or continuing her true calling as an FBI Agent. Decisions, decisions.

I have no idea what Stuart Sayger was thinking while he drew the art for The Priest. Each of the main characters feel like caricatures and no two panels look quite the same, which makes it difficult to figure out who’s who throughout the entire story. At one point, the art looks like sketchy, scribbled lines. Another panel depicts the FBI agents with disfigured body parts. Needless to say, the art (or there lack of) is very distracting from the storyline. At one point, Scully looks like a monster. Another page later, she looks exactly like Gillian Anderson. It’s too bad Sayger takes attention from the story of Writer-Producer Frank Spotnitz. I could see this storyline expanded to the TV screen as a one-shot, if there were more spiritual elements added.

Although the art in Talk to the Hand by Andrew Currie is superior to everything found in The Priest, the entire storyline by Dave Sim felt out of place for an X-Files story. Some part of Scully’s conscience longs for a former flame. She lives alone. Mulder is nowhere to be found. They’re not living together. Scully is still working in the FBI. So is Mulder. When, exactly, does this take place? Clearly, this is a What If scenario, since nothing within it follows any sort of X-Files canon. Interesting concept, but it doesn’t seem work.

Obviously, this book is more than a year old, written not long after IDW began publishing Season 10 of The X-Files. Both stories have their flaws and feel experimental, at best. The characterizations of Mulder and Scully feel familiar, but they’re not quite on point. Overall, the stories are uneven and don’t exactly follow continuity canon… and they feel like the adventures of our favorite FBI agents in name only.

I want to believe IDW will expand The X-Files Universe by creating some spooky stories through their comics… and I’m still waiting for the good stuff to finally arrive.

Strength: Two paranormal mysteries involving Mulder and Scully.
Weakness: Too bad they feel out of place and outside the show’s canon.
WTF Moment: If a phone call from beyond the grave is more believable than a talking mutant hand, the stories might just be a little bizarre, even for The X-Files!