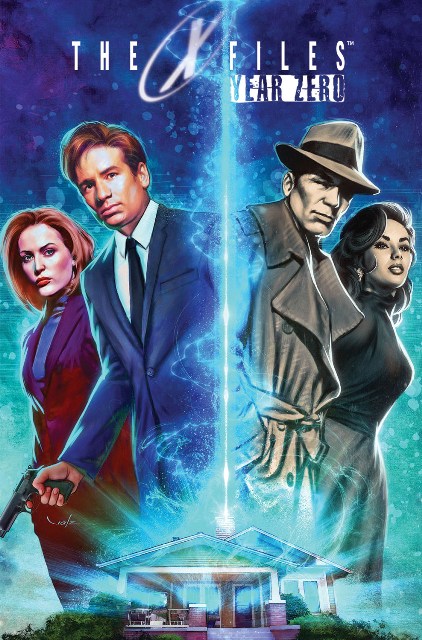 Mulder and Scully inadvertently explore the origins of The X-Files as two simultaneous storylines converge in Year Zero.

While investigating a bizarre present-day incident, Mulder and Scully discover a possible link to past case, one which was generally accepted as the original X-File. Through a flashback, Mulder gives the details of that original case.

Back in 1946, Millie Ohio receives a possible tip concerning a series of unsolved, animalistic killings. At that time, the FBI didn’t hire female agents, so she becomes a Special Employee for the duration of the case — a title given to only one other female within the agency. She’s paired with Special Agent Bing Ellinson, who’s known for being a loose cannon, setting them both up for failure.

Through their investigation, they’re introduced to Mr. Xero. He’s clearly from a different place, has extraordinary powers and helps solve crimes with riddles, but the pair can’t quite figure out his angle. Back to the future, Mulder and Scully also learn of a Mr. Zero, who has offered helpful tips for solving multiple crimes. Together, they’re two similar cases separated by a handful of decades that could lead to a startling future discovery.

Different types of animalistic crimes are reported, some involving panthers, some involving wolf-like creatures and even a Manitou (an evil spirit that cannot be killed). In years past, whenever The X-Files depicted stories based on Native American legends, they were always thrilling. This one is no exception.

The X-Files: Year Zero is a trade paperback collecting all five issues of the original comic-book miniseries. For once, I really enjoyed the interaction and dialogue of Mulder and Scully within these stories. For some reason, the Season 10 writers just can’t create scenarios or conversations that accurately portray the characters. Year Zero has gone against the grain with this stand-alone storyline. Not only is the writing an incredible improvement, but the artwork is MUCH better than all previous Season 10 stories combined. Mulder and Scully actually look similar to David Duchovny and Gillian Anderson, which is a miracle, since so many previous stories weren’t even close to achieving this feat.

While this isn’t the actual introduction to Bing Ellinson and Millie Ohio as characters within The X-Files Universe, this storyline really fleshes out the characters. Karl Kesel is the same writer who previously introduced these 1940s characters in Merry Christmas, Comrade. The writing is spot on and Ellinson and Ohio shine brightly in the spotlight. Their characters are a couple of breaths of fresh air for this aging franchise. Everything about this book is what I hoped the later years of The X-Files TV series would have (but never did): smart action, witty dialogue and a couple of new characters who could co-exist along with Mulder and Scully, without replacing them.

Unfortunately, a light dose of retcon is salted onto the mythology of the TV series. Previously, Arthur Dales was credited as being the original investigator of The X-Files, but apparently, he didn’t have any knowledge of these previous cases. I’m not a retcon proponent at all, but if both scenarios can somewhat co-exist together, I’m OK with that. And since Chris Carter is the Executive Producer of this comic series, surely he added some sort of script input, wouldn’t you think? So, is Year Zero the actual origin story of The X-Files? Or will a third possible scenario reveal itself sometime soon? Only fighting the future will surely reveal the truth, which is out there… somewhere.

Although the story felt a little anticlimactic, this is the best X-Files story created by IDW so far. I hereby nominate Karl Kesel and his art team to hijack the Season 10 crew for a hostile takeover. His tales are where the future (as well as past) lies, for The X-Files. I want to believe he can make it so.

Strength: Great storyline, great portrayal of two separate pairs of FBI agents.
Weakness: Can this please be the last origin story for The X-Files?
WTF Moment: An X-File app, offering a searchable database and created by The Lone Gunmen? Sounds plausible!

Notable Quotes:
– “This is no time for texts!”
– “Oh, you are a clever Fox.”
– “Got a soft spot for strays, I guess.”
– “I’ve seen things a lot harder to believe.”
– “Mulder tends to attract a unique kind of fan.”
– “You’re saying these are people who turn into cats?”
– “It’s very freeing, knowing you’ll never run out of time.”
– “Why are you giving this case to the FBI’s most unwanted?”
– “We get another tip from that guy, it better come with a decoder ring.”