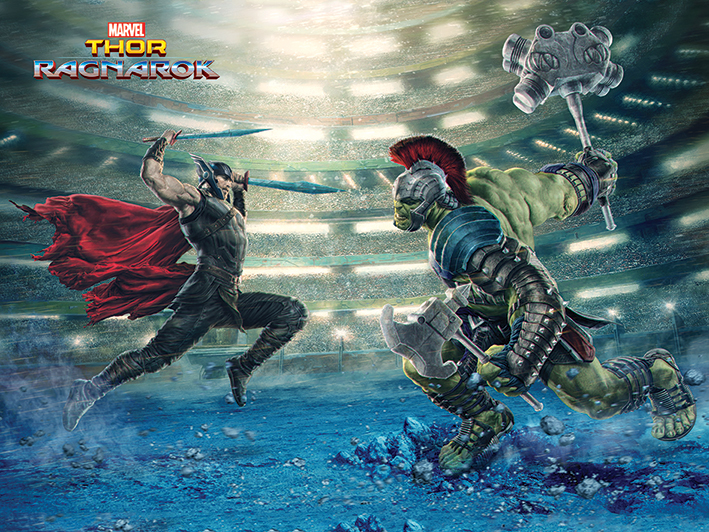 Thor: Ragnarok brings an epic and comedic side of Thor and the Hulk that has been hinted at, yet not fully explored, with these characters in the Marvel Cinematic Universe. Each lighthearted moment looks to be balanced with an over-the-top grandness befitting a Norse saga. Today, we are going to explore the character’s similar treatment in the pages of their respective Marvel comics.

Ragnarok, in Norse mythology, is the end of all things — the Norse Apocalypse — culminating in a devastating battle of all gods and beasts, which leads to the destruction of the worlds. The stakes are high for the Odinson, but Thor has seen these moments before.

None can speak of the epic-ness of Thor without discussing the amazing run of comic book writer and artist Walt Simonson. His nearly five-year run on the comic from 1983 to 1987 redefined the thunder god, forcing him into situations as dire and grandiose as what is hinted at in the film.

Simonson opens his epic and description does not do the actual words justice. “The sound of thunder reverberates throughout a billion, billion worlds. DOOM!” A figure of immense size is forging a weapon from the heart of star onto an equally large anvil. One amazing full page at a time, in large, oft-times one-page panels, meted out sparingly over the course of a year, issue by issue, does Simonson tease the coming of Surtur the Fire Giant and his army.

Although he did not introduce Hela, the Norse goddess of death, Simonson pitted Thor against her during his tenure. She is someone other than Loki or Odin who cannot only match the god of thunder in terms of raw power, but can also best him. Her touch scars Thor, disfiguring him to a point he grows a beard to cover his wounds. 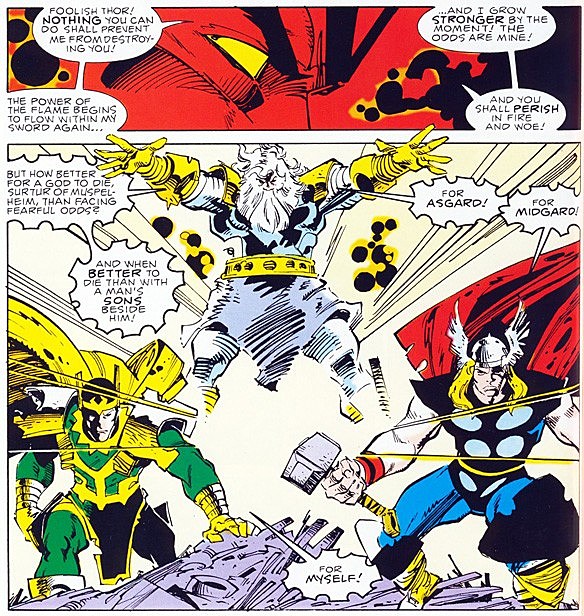 The film hints at a galactic cast and there is none more associated with outer space than Simonson’s creation, Beta Ray Bill. An alien from another dimension that looks like a bipedal horse, Beta Ray Bill is the last of his kind and defeats Thor. Bill’s strength is surpassed by his honor and spirit. He is one of the few non-Asgardians, one of the few individuals to ever wield Thor’s mighty and mystical hammer, Mjolnir. Bill is so noble and pure in spirit, he impresses Odin, who creates a second mystic hammer for Bill.

The main event in Thor: Ragnarok is the gladiator-style battle between Thor and the Hulk. Ragnarok seems to answer the question: Where were Thor and Banner during Civil War? And judging from the arena battle from the trailer, the answer can be found in the comic book storyline, Planet Hulk. The MCU shows a happy relationship between Hulk and the Avengers, but in the comic book world, this has been far from the truth. The Hulk is a founding member of the team, but he left after their first adventure, as he is not a team player. There have been many interpretations and incarnations of the Hulk over the years in the comic book continuity, but one constant is the Hulk’s unstable rage. He’s one of, if not the most powerful creatures on Earth, and he is uncontrollable, bringing destruction wherever he goes. What do you do with a walking natural disaster? Tony Stark and the other Marvel geniuses trap him in a spaceship and fling him to another unpopulated planet, far away in another dimension with no ride home.

The ship goes off course and crashes onto the planet Sakaar, a bloody land with advanced technology, side by side with deplorable poverty. It is a land of slaves, dictatorial leaders and bloody conflict. Hulk is weakened by ray upon his arrival, but battles his way in a gladiatorial arena, bloody battle after bloody battle, rising in both fame and stature. As his strength returns, he leads a revolt against the ruling class and eventually… well, this may be the plot of another Hulk film.

With Thor: Ragnarok borrowing heavily from the aesthetic, if not the plot of Simonson’s comics and the stylings of Planet Hulk, the viewer is in for a treat. The film looks to be as epic as the comics they are based on, a worthy saga for two of the most power characters in the Marvel Universe.