Hello folks and welcome back to another installment of #HauntLife, the blog that covers pop culture from a haunter’s point of view. This week, the Nashville haunted house scene begins to light up with some of the best attractions, opening up for a new season of chills and thrills. Among them is the haunted house that I work for, the No. 1 haunted attraction in the country, as voted by USA Today, Nashville Nightmare. So, read this preview and completely biased review knowing that it is biased (but I will really, really try not to be).

A recent graphic was released from the haunted house review website, The Scare Factor. This image (shown below) gives a detailed break down of the number of professional haunted houses in each state. The site has been running these numbers each year, and each year Tennessee keeps growing and keeping pace with the rest of the country. If my math holds true, the Volunteer state is the eighth ranked state, by the number of haunted attractions with 93. Now, if you take the population of the Top 10 states, based on the number of haunted houses per state, Tennessee and Indiana are tied up for first place, meaning that there are many options for people looking for scares. In my opinion, the bigger states need to get to stepping to keep up with us. 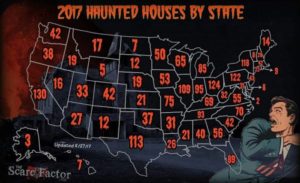 We are starting our seventh year, and this year is going to be the biggest yet. Last year, we added two new attractions in Industrial Undead and Fairy Tale Hell, as well as having the two mainstays in Night Terrors and Horror High. But this year, owner Brad Webb and the creative designers decided it was time to change over those two to something a little new. So, new for 2017 are Phantoms and Reformatory.

In the Reformatory (located in the Horror High building), a Catholic reform school has been invaded by demons. The result is the faculty and students have begun to hear the whispers of evil, telling them to do ungodly things to those around them. For those entering who have not been converted, the result is only one thing: convert or die. In this school, there are no more classes, nor more books, but you have to worry about something more than the teacher’s dirty looks.

Enter Phantoms, where the disembodied spirits of some of the world’s most sinister murderers and killers still exist. The curator of this macabre museum has collected artifacts from all over the world, bringing them home and hoping to open the portal to hell. You will travel through some of the scariest scenes ever devised, as you sink deeper and deeper into the grotesque underworld. Beware what lives in the sewers underneath and watch your step as you enter the subway stations far below the earth’s surface. Evil is alive and well inside Phantoms.

These two new attractions are not the only things Nashville Nightmare has added during the off season. We have partnered with one of the top carnival concessions company in the state to bring a smorgasbord of unique foods and drinks (including alcoholic beverages, starting in October). We have added a licensed pyrotechnician to our team, giving us our new fire show over the entrance queue. Our clown maze has been expanded, and we will be adding two three-minute escape rooms, giving you yet another chance to get more bang for your buck. Our retail shop is much larger now, with a greater selection of cool merchandise. Plus, our queue line actor pool has increased substantially, giving tons of entertainment options to you while you wait to enter one of the four attractions on site.

Not only did we add all these things to our Madison location, but Nashville Nightmare has partnered up with Nashville Shores to create Nashville Haunted Woods at Priest Lake, a massive outdoor haunted attraction. Headed up by creative mastermind Carroll Moore, this all-new attraction will give guests a chance to enter several horror movie scenes, from The Purge to A Nightmare on Elm Street. And with this haunt being on the lake, who could leave out Jason? I know we couldn’t! A full review of Nashville Haunted Woods is coming soon.

I know there are other amazing haunted houses in the Nashville area. Some other great choices are Monster Mountain, Slaughterhouse, Haunted Hell, and Devil’s Dungeon. I would love to review these, but given the nature of the business, I feel it would be unfair to judge them since I am employed in the business. I would love to hear your opinion of any of the haunts in the Nashville area, so feel free to reach out to me here.

Until next time, enjoy the #HauntLife.