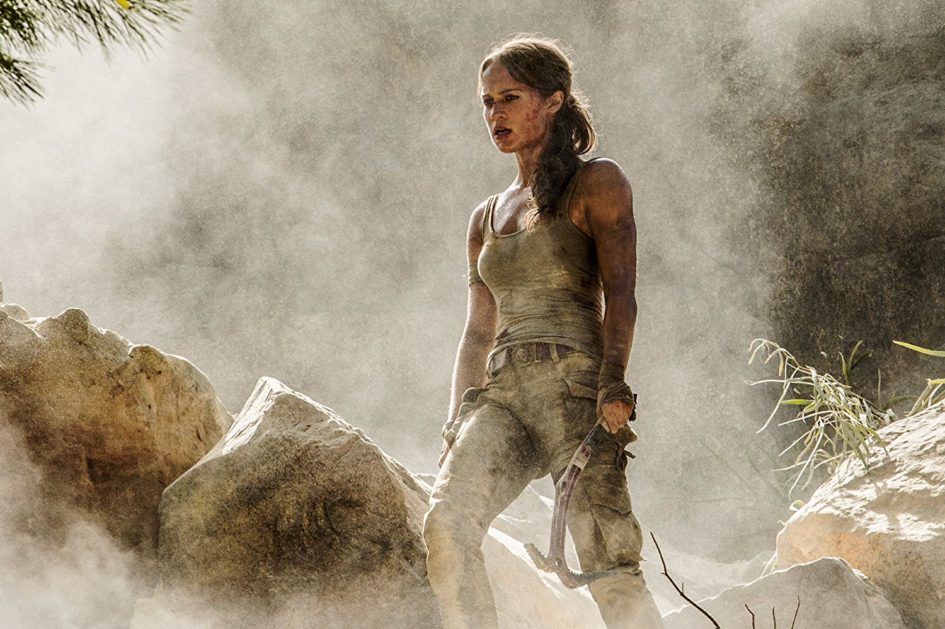 Per Matt
Have you ever been immersed in an epic, action-packed video game and thought to yourself, “I bet this experience would be much better as a feature film?” Well, Tomb Raider is the exact opposite.

After learning the last-known whereabouts of her missing father who has been legally declared dead, Lara Croft (Alicia Vikander) instantly transitions into the risk-taking titular character without any such training. Directed by Roar Uthaug (who?), this reimagined adaptation to the well-known franchise plays just like a game. Maybe a bit too much. In fact, there’s all sorts of elements crammed into the film that any gamer will instantly notice: Plenty of platforming while on the run from the bad guys (and an undead menace), a color-matching minigame for Lara to reach her final destination and even some quick time events to round out the experience! Honestly, I couldn’t believe it, until I actually saw it.

Just like a game, there isn’t much of a storyline, but tidbits of a backstory are discovered when the action gets paused. And very much like a video game, Lara gets beaten up and injured to the extreme, way too much to possibly survive in real life. So, toss the believability factor out the window. (But if you’re watching a filmed version of a video game, reality isn’t your top priority.)

While Angelina Jolie may have looked the part of the original, out-of-proportion original character in two previous feature films, Vikander really does look like the well-proportioned rebooted character from the series. After watching Vikander in Ex Machina, Jason Bourne and The Man From U.N.C.L.E. it’s clear the actress is aiming for intriguing material, but she hasn’t quite landed in a successful franchise. That search may have ended, if gamers will vote with their wallets at the box office this weekend. Hopefully, her fans will find the actress in many more big-budget films in future years.

Apparently, this movie took the storyline practically directly from the recently rebooted franchise games, so what went wrong? Let’s start with the Norwegian director, who’s probably better known for directing music videos than anything with a big budget. Maybe Vikander requested Roar. Or somehow, he was attached to the production company. Regardless, after two long hours, the main achievement that’s remotely noteworthy is Vikander’s determination to build her big-screen resume, which this film absolutely does, but not much else. Whether that’s a positive or negative element, you be the judge.

Transitioning successful video games to the big screen has always been a risky business transaction, and sadly, this effort falls to the unsuccessful wayside of quality entertainment. You’re more likely to find the DVD or Blu-ray boxed set paired with a copy of the most recent video game at a big-box retailer near you very soon than at a movie theater for very long. I’d wait to see it when it’s cheap and you can get a deal on the combo pack.