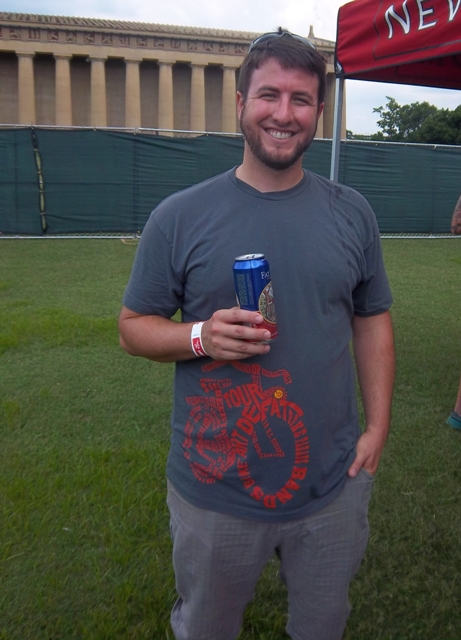 Per Matt
New Belgium Brewery hosts a free event called Tour de Fat, which takes place throughout the United States, promoting its products and independent spirit. Entertaining events in the lineup include a sponsored downtown bicycle ride, magicians, singers, food trucks and a wide assortment of New Belgium Brewery’s beers (including the ever-popular, Fat Tire). Southeast Field Brander Jared Burton spoke with me at the recent Tour de Fat event held in Nashville, TN, that specializes in “beer, bikes and bemusement.” Burton speaks about New Belgium building a new brewery in North Carolina, expanding into the Southeast and collaborating with Nashville’s Yazoo Brewery.

In your own words, how would you describe Tour de Fat?
– “This festival is unique. It’s not a concert; it’s not a beer fest. I always say its a ‘Choose Your Own Adventure.’ We’ve got some big games, you can walk around and try some beers. We try to make this as approachable as possible. A lot of times, when people hear of Tour de Fat, they think it’s a bike race. It’s not a bike race. It’s about as far as you can get from a bike race as you can possibly get.”

Is this your first time to Nashville for the Tour de Fat?
– “This is the third Tour de Fat in Nashville. I’ve been to two of the three. I didn’t get to make it last year.”

How does Tour de Fat differentiate each city?
– “It’s the feel of the city. I’m based in the Southeast and we’re a Colorado-based company. Biking is one of those things that has flourished a little more in the Northwest Corridor and out in the West Coast. It’s working its way across the country, where it’s getting built into the infrastructure, you’re seeing it on the roads and you’re seeing it be part of life, in general. When you see Tour de Fat, we never really do a lot the first year. We kind of really rely on word of mouth. A lot of that is the size of the company. We don’t have a ton of resources to make these things huge. Obviously, the one in Ft. Collins is, we have 20,000 to 25,000 people come out. It’s huge. We’ve been doing that one for 13 years.”

“Nashville is in it’s third year. It’s neat to see it kind of takes on its own character. Really, the third year it hits its stride. You see the Tour de Fat in your city become its own thing. The people, who come, take ownership. You see more people on bikes, in costumes. It’s just neat to see that progression.”

How was Nashville chosen for this event?
– “It’s one of those things where we’re working in new markets. New Belgium, itself, is not a national brand, yet. We’re in about 31 states. We’re continually growing. We are, currently, working on a second brewery in Asheville, North Carolina. Right now, all the products we brew come from Ft. Collins, CO. As we begin to grow, we look at our footprint and we try to connect with larger markets. We don’t have a ton of resources and this is a really big investment into the community. It doesn’t cost us a lot to bring everything out here and then all the proceeds that we make from today go to the nonprofits attached. We don’t keep anything from schwag sales, anything from beer sales, anything from the money they raised from the parade. All of that goes to the different nonprofits involved.”

When is the North Carolina brewery scheduled to open?
– “Late 2015. We did some deconstruction. We’ve taken the properties that were on the Brownfield site. We’ve worked with the city of Asheville and they’re actually putting in some walking and bike trails from the facility to downtown. We just won to 100% employee own it by the end of the year. We did that. We did some expansions to Ft. Collins. We were trying to speed up the timeline, and then we just pulled it back a little bit, because we still have some space at Ft. Collins for some brewing. We just want to make sure that when we do bring Asheville online, that Ft. Collins is at full capacity.”

How did the Nashville bike parade this morning?
– “I have no official estimates, but that bike parade was very big. People are starting to get into it, starting to realize that this is a festival about being a part of Nashville, being on a bike and enjoying some good beer.

What were some of the participant’s costumes you noticed in the parade?
– “There was a guy with a ‘Moose on the Loose’ sign, and his actual bike was a moose. That’s always above and beyond. Another guy had a bike with his dog in a sidecar. That’s just two of the ones that stick out in my mind. There were some really great ones out there.”

Will Tour de Fat have any other Nashville events throughout the year?
– “One of the capstones we have been doing at every show, is we get somebody who donates their car. We take the car, sell it and give the money to charity. We give them a set amount of money and they go to a bike shop and get a brand-new commuter bike. We ask them to use that as their main source of transportation for one year. We try to follow their stories as much as we can. We’ve got a lot of great beers out here, but this is a festival that is not anti-car, but it’s pro-bike. We’re trying to celebrate the idea that this is an option, and make that a big piece of this.”

Will New Belgium collaborate with the Yazoo Brewery again, any time soon?
– “We are going to work with them soon at some other events. I’m sure we’ll continue to do more in Tennessee. We’re still talking with them. We love Yazoo. We were super excited to do Rufus with them. We did get to bring it out to a festival, not long ago. I’m sure, as we get into North Carolina, we’ll do more stuff with those guys.”