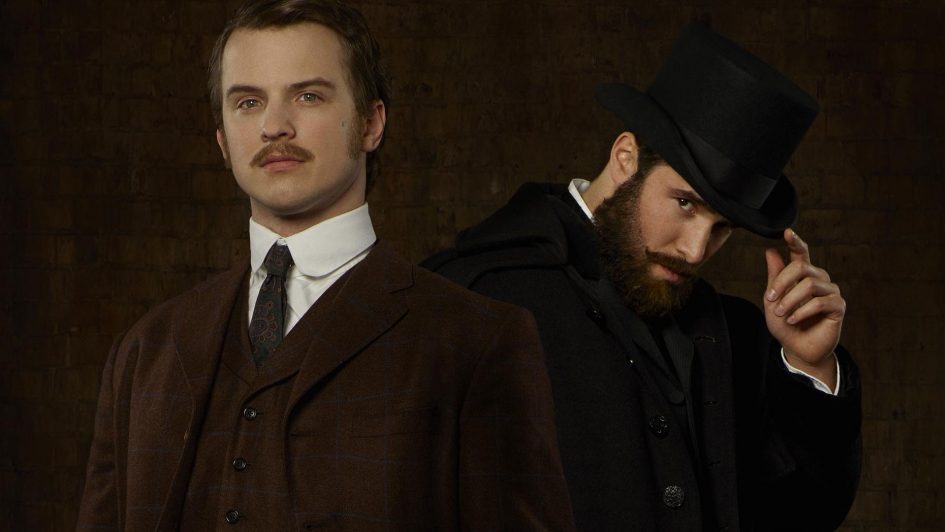 The funny thing about a TV show based on time travel, that doesn’t actually leave the present day is… well, it isn’t really funny.

Kevin Williamson takes a break from horror (does he still work in that genre, anymore?) with an adapted TV show that airs opposite another time-travel TV show (Making History), thus making this at least the third time-traveling series to premiere this season alone (can’t forget Timeless). Time After Time attempts to answer the age-old question: Whatever happened to Jack the Ripper?

A stylish London of 1893 is depicted in the two-hour series premiere, where the Ripper goes by the name of Dr. John Stevenson (played by Josh Bowman). For his day job, he works as a respected surgeon; at nights, he murders prostitutes and the homeless. But when the constables of Scotland Yard target him for questioning, he manages to slip into a time machine, vanishing forever. This working time machine is created by H.G. Wells (Freddie Stroma), in an attempt to research some of the very novels he’s about to write. Both 19th century characters arrive in the present-day United States and after watching three episodes, the main theme of the series seems to simply be fish out of water, but without many laughs.

Wells partners up with a New York Metropolitan Museum assistant curator (Genesis Rodriguez) and his great-great granddaughter (Nicole Ari Parker) in a race against time (see what I did there?) to capture Stevenson and prevent any further murders. Based on a novel of the same name, Time After Time offers a learning curve for the displaced main characters. The Man Who Invented Tomorrow doesn’t quite fully comprehend sarcasm, is a slow learner when dealing with 21st century life, is fascinated by technology and race relations, while quickly learning to abide by current-day traffic laws. The good doctor is upset that his past medical accomplishments were never spotlighted, but his killings were. There’s a chasm in terms of comparing their characters. While Wells is a little too naive, Stevenson is too smart for his own good, especially coming from Victorian England.

In terms of the bigger picture, the storyline is a little bland and there’s not many special effects, but the time machine does look expensive and cool in a steampunk kind of way. I like the idea of a TV series built around historical fiction, but the trouble with time travel is there always seems to be a few time paradoxes involved, popping up from time to time (see what I did there?). It’s an interesting mash-up, but so far, the characters haven’t yet exploited the central core of the theme with maximum results. If you have a TV show based upon a time machine, you should take the viewer on a ride. So far, that ride’s been bumpy and boring, with no threats of ripping any holes within the fabric of time (or this reviewer’s interest), which is a bad forecast for this emerging series. Time After Time needs a little jolt in its story, before it fades into the sunset as a killer time-traveling afterthought.