Lawman at The End of The World: The Philosophy of Rick Grimes 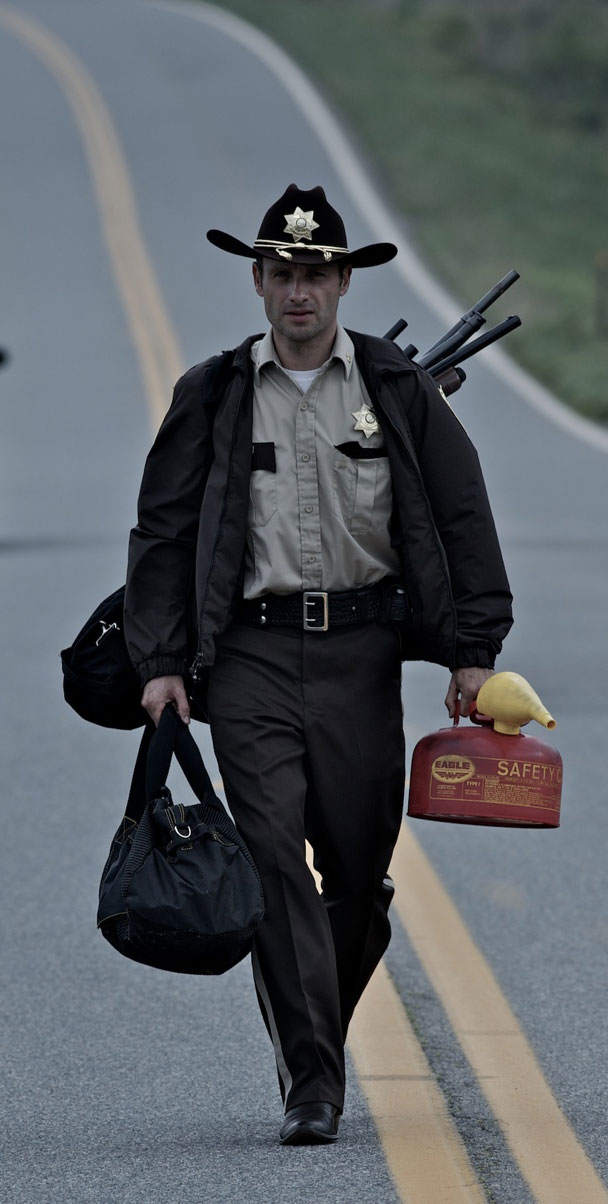 “To be sane in a world of madmen is in itself madness.” ― Jean-Jacques Rousseau

I can’t help but think of Rick Grimes and his cowboy boots when I see this quote by the 18th century political philosopher Jean-Jacques Rousseau. Maybe such a thought sounds a little too lofty for a TV show based off a comic book, but if any comic character can represent lofty idealism and low entertainment at the same time, it must be Rick. After all, this is what Rick is: A sane man in a madman’s world.

I want to take some time to explore just what makes Rick Grimes both a great protagonist and a fascinating character in an ensemble cast. Yes, Rick is an attractive white man with crystal-clear baby blues and an impressive beard, but that’s not what makes him a good hero. There are so very many interesting characters in TWD that Rick could come off as a boring, luke-warm figure next to the likes of Daryl and Michonne. So, what sets Rick apart? Rick has a future.

This is Rick’s driving force. Every other character in the show, for the most part at least, is trapped in the now. The dystopian world of The Walking Dead forces others to focus simply on survival. We can see this easily in the way people talk on the show. The Saviors are constantly harping on the idea that only the present matters, and Negan often justifies his brutality with the nihilism of a man who believes nothing matters and everyone will die soon anyway.

This makes Rick not only a good protagonist for viewers, but it also makes him a good leader. Characters are drawn to him because he sees something that other leaders cannot. Where other leaders like Negan and The Governor rule with violence and dominance, Rick seeks to create something stable for the world he lives in. This perspective is what some philosophers might call viewing the world sub specie aeternitatis, under the aspect of eternity. His philosophy and outlook is rooted in trying to see the world and his ethical decisions as removed from the immediate.

“…only one thing can be repeated again and again, also in our time: in ethical decisions a man must consider his action sub specie aeternitatis and then, no matter how it proceeds, it will proceed rightly.” — Dietrich Bonnhoffer

Now it becomes easier to see why many characters like Daryl, Michonne, and Morgan, characters who had no futures and had nearly given up on life, are drawn to Rick and follow him, despite his other flaws. We can see why idealists like Glenn and Herschel and Jesus believe in him as a leader, given that he shows them the possibility of a stable future. And we can especially see why the villains are juxtaposed so well against Rick. These villains are dominant and capable and charismatic, but they provide no real future for their followers. They become narrow minded and selfish.

They represent a challenge for Rick and his philosophy, as well. Shane might see Rick as naive in his idealism. The Governor makes Rick look incapable of organizing this future in a wasteland. Terminus turns his optimism on its head, a darker image of what happens to good people in a state of nature. Negan emasculates him, trying to show how dominance and aggression are the only answers in a violent, lawless world. In other words, Rick is the sheriff in a lawless town in the Wild West, slowly creating order where there is none. Of course, he could also be a dystopian Don Quixote, tilting at windmills at the end of the world.

“I know this sounds insane, but this is an insane world.” – Rick, Season 6, First Time Again

*If you liked this article and want more like, it then let me know in the comments section.*