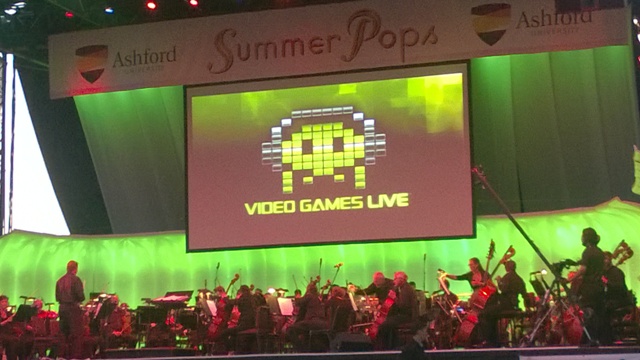 As a big video game fan — as well as a former percussionist — I really enjoy soaking up the atmosphere every time a symphony orchestra performs the music of Video Games Live. It’s an incredible atmosphere that must be witnessed to fully understand. Kids of all ages usually attend, especially those young at heart. When Host-Composer-Performer Tommy Tallarico takes the stage, the atmosphere becomes electric, just like a rock concert.

Performing at the Embarcadero Marina Park South, this concert-performance was incredibly unique. The outdoor venue is situated on the East side of the San Diego Bay, so there’s generally a cool breeze that swirls around the property (which is always welcome when walking several miles each day during the con). My seats were located in the very-close champagne section, which I enjoyed immensely.

For each performance of Video Games Live, there is a select group of very special guests who either perform or direct the orchestra. Since this performance was timed alongside SDCC, there were some extra-special guests in attendance. Daisuke Amaya (aka Pixel), the Creator of Cave Story, flew in from Japan for the world-premiere performance of his video game soundtrack. Youtube celebrity Viking Jesus performed a heavy-metal version of Star Fox 64 with his electric guitar. And the world-premiere performance of the soon-to-be-released Blizzard Entertainment franchise, Heroes of the Storm, was performed as well.

The music of The Elder Scrolls V: Skyrim, Final Fantasy, League of Legends and World of Warcraft were all performed as well.

Composer Garry Schyman directed the creepy, understated music of Bioshock, which was one of my favorite performances of the night, along with the 30th Anniversary Tetris Opera, featuring vocal soloist Jillian Aversa. I also really enjoyed the music by Critical Hit, a group made up of Blizzard employees that performs some amazing video game music. I was especially impressed by Tina Guo, who plays the electric cello. She is a rock star!

The concert wrapped with two of the all-time most-requested songs by Video Games Live fans: Chrono Trigger and Chrono Cross.

Before the show began, there was a costume contest, which was won by an infant RPG fan. Sadly the baby beat out a pair of great Mortal Kombat mariachis, who I was really pulling for. Generally, at Video Games Live performances, a player is chosen from the audience to play Guitar Hero with the symphonic orchestra on the stage, but due to all the special-guest performances, that segment was skipped for this round.

Having attended this concert before, I’m starting to notice when some of my favorite songs aren’t performed. Music by the franchises of Halo and The Legend of Zelda, as well as other retro games were missed, but I really enjoyed the music that was performed by the San Diego Symphony.

With each performance of Video Games Live, Tommy Tallarico keeps surprising me, surpassing any expectations I might have. I cannot wait to see what lies ahead for the next tour stop I can catch! 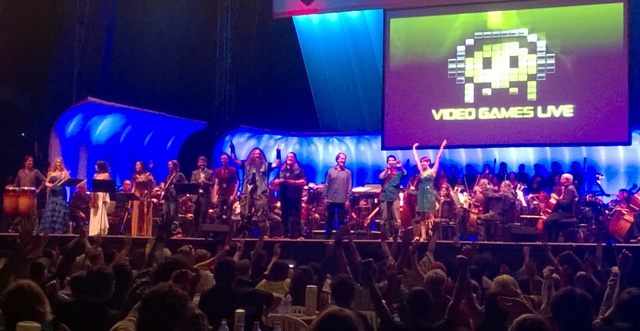