The Walking Dead: Episode 4 – Amid the Ruins 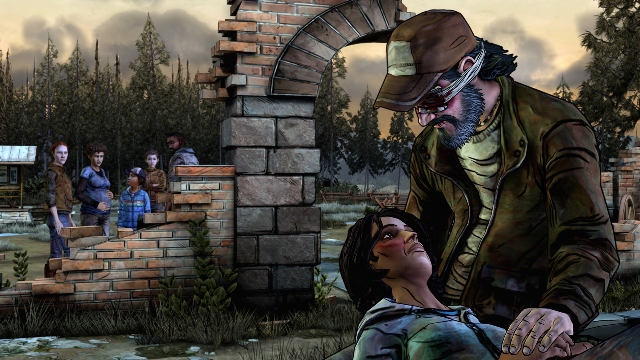 Since Bill Carver’s already been dealt with, now what? I guess it’s time for Kenny to help deliver a baby!

For two entire seasons, Kenny can’t seem to catch a break. He always seems to lose everyone he cares about. Back in Season 1, he lost his family and wound up… well, lost. Now, in Season 2, after getting kidnapped and losing an eye, he loses his love, Sarita. Talk about a tragic hero. Does anything positive ever happen to this character during the Zombie Apocalypse?

In Episode 4: Amid the Ruins, Kenny shares the spotlight with Jane, the bad-ass loner. Both are paired with Clementine on different occasions to teach her new lessons. Jane teaches her a new take-down procedure, while Kenny shows off his paternal nature, helping Rebecca deliver her baby at a compromising location.

After the Gang reunites, the others hunt for the necessary materials to help with the childbirth, but a herd of walkers have arrived to complicate the situation. With supplies dwindling and snow slowly falling, the Gang seeks shelter elsewhere. To make matters worse, Arvo appears and his Russian crew take the Gang hostage, setting up for some major fireworks in the final episode of Season 2!

So far, this is probably my favorite episode of Season 2. While Kenny is obviously my favorite character, I’m really enjoying the interactions with some of the minor characters, before they ultimately disappear. In my playthrough, I gladly left Sarah to die because she was too much of a sheltered baby, but was saddened when Jane left the group. I hope she ultimately returns. Clementine is getting older and wiser, but with that comes a heavy conscience. That makes the game very fun to play. The choices are never easy and beg for multiple replays.

All of the achievements/trophies are story-based. None of them are missable.

I don’t know if Telltale Games will ever let Kenny have a happy moment. It seems unlikely to happen in Season 2, since his injured eye may be infected. If he somehow survives the injury, he will most likely get bitten by a walker in the final episode of the season. I really hope not, but it looks grim for him.

Randomly, at a Civil War Battleground location, a statue offers this Easter Egg: “Fallen, but not broken.” While that statement could easily symbolize Clementine’s highs and lows (since she is the main character), I will submit it is meant for Kenny. Although I haven’t always agreed with his actions, I’ve always been pulling for him to succeed. He has had a very difficult journey and has made many enemies along the way, but he’s always done his best to help his family and friends survive. With one more episode to go, I hope he gets the opportunity to fully shine in the spotlight and go out (IF he must) as a hero.

Strength: Great character interactions; Kenny shines in the spotlight.
Weakness: The walker QTEs can be a pain in the butt at times.
WTF Moment: Jane takes Clementine (and the videogame player) to Walker School.

Notable Quotes:
– “You run; you die.”
– “Does this shit ever end?”
– “Lee would’ve loved this place.”
– “I’d eat the shit out of that raccoon.”
– “Has your crew always been dysfunctional?”
– “Kenny seems broken. Broken people get reckless.”
– “You think because you’re a little girl, you can get people killed and no one will care.”
– “Just because you’re some loner who doesn’t know better herself, doesn’t mean you’re better than me.”