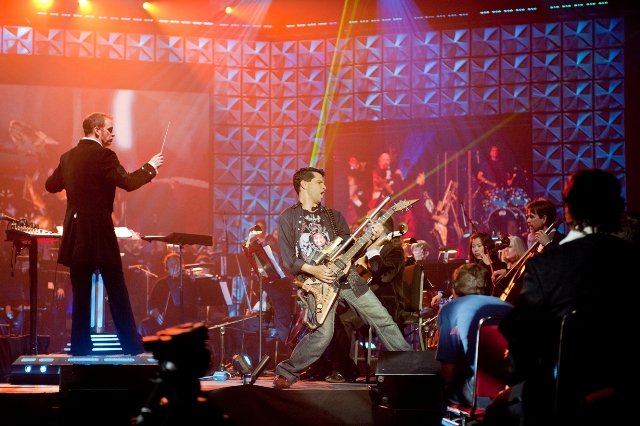 As a lifelong gamer and a musician, I’d been looking forward to attending Video Games Live for a very long time. After recently interviewing Composer Tommy Tallarico, I was even more excited.

Video Games Live combined music from past and present video games, performed by the symphony and choir ensemble with the pizazz of a rock concert. Concert lighting and large video screens supplemented the music throughout the performance. It was truly a rock concert atmosphere for geek culture.

With over 100 prepared arrangements, Video Games Live never performs the same concert twice. A sampling of the music performed on this night include medleys of Super Mario. Bros, The Legend of Zelda, Skyrim, Metal Gear, Pokémon, Final Fantasy and World of Warcraft. Especially impressive was the choir accompaniment throughout the Halo medley.

Before the concert, a Guitar Hero competition was held in the lobby. The winner of the competition, Ryan Gleason, was selected to play the game onstage, alongside Tallarico on electric guitar and backed up by the Nashville Symphony Orchestra, performing Foo Fighter’s The Pretender. Tallarico challenged the contestant to score a minimum of 400,000 points to win a prize bag, but Gleason upped the ante by choosing to play on Expert difficulty and to score 500,000 points. Everyone in the audience was shocked by his ego, but cheered for him throughout the song. In a close finish, he only missed a couple of notes throughout the entire song and surpassed the minimum score. The crowd went wild.

The highlight of the night included an arrangement by the University of Maryland Gamer Symphony Orchestra, featuring a medley of Tetris music. Unbeknownst to the gaming world, the original Tetris video game included a full choir accompaniment with the original music. Unfortunately, the original game did not have enough memory space to include the choir, so it was removed. Fortunately, the music was restored to its original status and it was glorious. Soloist Laura Intravia’s incredibly powerful vocal stylings were on display for all to enjoy. Her singing was incredibly moving and her addition to the already-amazing show
was welcomed.

Later in the show, Intravia performed an electric flute along with an arrangement she created for Donkey Kong Country. It, too, was impressive.

Video Games closed with a Portal 2 sing-along finale and was followed by a post-show meet and greet. The entire night was an amazing experience. Conductor Emmanuel Fratianni, Soloist Laura Intravia and Composer-Host Tommy Tallarico takes the Video Games Live performance on tour to another city very soon. I highly encourage everyone to attend this symphonic spectacle. In fact, I’m hoping to catch the show again next month, as it returns to Tennessee for a Chattanooga performance.