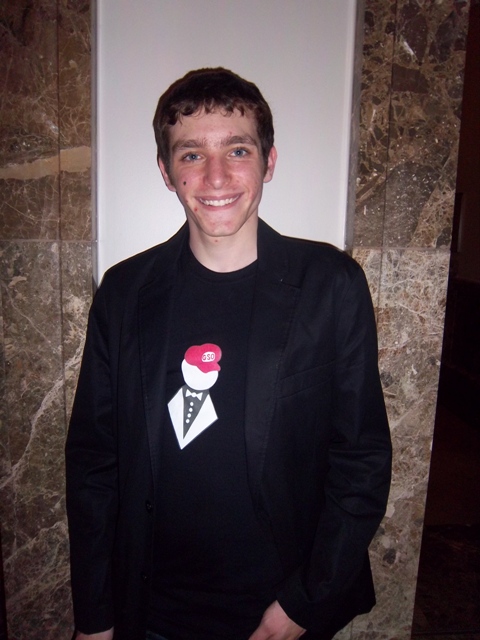 You were involved in starting a high school gamer orchestra. How did that start?
– “I saw the Gamer Symphony Orchestra concert at the University of Maryland’s campus in Fall of 2008 with several of my friends. The next day at school, one of those friends came up to me and said, ‘Joel, I want to start a Gamer Symphony Orchestra.'”

“I told him, ‘You’re crazy. Let me help you.’ We got our band director onboard and we put out a few announcements in the school. At our first rehearsal, we had about 14 people. We had about two dozen people at our first performance. The band director was incredibly supportive. He let us perform at the school’s concerts as the school’s only non-classroom ensemble. I saw their Spring concert two weeks ago. They’re still performing as a non-classroom ensemble at this school’s instrumental concerts.”

What were some of the first songs you performed?
– “We played a Halo arrangement that my friends and I did. And a Tetris arrangement — not the one they played tonight, but it was another Tetris arrangement that was borrowed by the University of Maryland. I later arranged Luigi’s Mansion medley. We played ‘Still Alive,’ in a Mario jazz quartet (me and the other founders) for a Senior thesis as a last hurrah. Since then, they’ve played music from a ton of different games.”

“I wanted to bring that to a bigger audience, and what better audience than Video Games Live? This is how we were indirectly inspired. What if I said, ‘We’ve done this. We can help you do this?’ Basically, the goal is at every show I go to this summer with Video Games Live, I want to try and get at least one person in the audience to be inspired to start a Gamer Symphony Orchestra in their school. It’s not as difficult as one would think. It’s really a magnetic concept. You just need one or two people who have the drive to lay some of the logistical groundwork, and from there, it just explodes. People flock to it.”

“The Gamer Symphony Orchestra in Maryland has lots of arrangements that we are more than happy to give people. Obviously, we make sure credit is given where credit is due. We make it as easy as we possibly can for people to follow in our footsteps and not have to reinvent the wheel.”

Has there been any video game music that was difficult to arrange?
– “None really jump off the top of my head. Particularly in the past few years, video game music has become much more orchestrated, as a whole. Arranging it has become much easier. Nowadays, it’s usually pretty easy to get almost everything you need from the original source material. Because the sound technology has improved to that point where, even if it’s not an actual symphony recording, they have the ability to make it sound like a symphony is playing.”

How did the Gamer Symphony Orchestra get involved with Video Games Live?
– “We first had this collaboration with Tommy in the Spring of 2011. They contacted us and said, ‘We want to do something together.’ The end result was bringing Tetris to them. It’s since become a staple in their concerts. They play it in almost every performance.”

How did you initially learn about Video Games Live?
– “Just through the grapevine. I’ve always been a fan of video game music. I’d seen other video game concerts before and I’d heard Video Games Live was coming to Wolf Trap with the National Symphony Orchestra. I got out to see the concert and it was amazing.”

Video Games Live performed a stellar Tetris arrangement tonight. Were you involved with that?
– “No. This was not my arrangement. It was from a guy named Greg Cox, who is now an alumni from the University of Maryland.”

What was your first video game?
– “One of my first games was Pokémon Yellow for the Game Boy Color, that I got for my seventh birthday.”

Have you ever collaborated with the Symphonic Anime Orchestra?
– “Yes. I’ve performed with them. They do a very interesting thing where they go around to conventions and they e-mail people the music. They have just three days of rehearsals in two-hour blocks, each day at the convention and then a performance on the last day. I happened to be at a convention they were at.”

Which convention was that?
– “It’s a convention called Katsucon, which is largely an anime-based convention in National Harbor, which is near D.C.”

What instrument do you play?
– “I play the trombone.”

Are you looking to join Video Games Live at some point?
– “It is very much a goal of mine. Who knows what will and what won’t happen. For now, I’m just happy to be here, promoting video game music and working with him. He’s really a great guy and has been very supportive the whole way.”