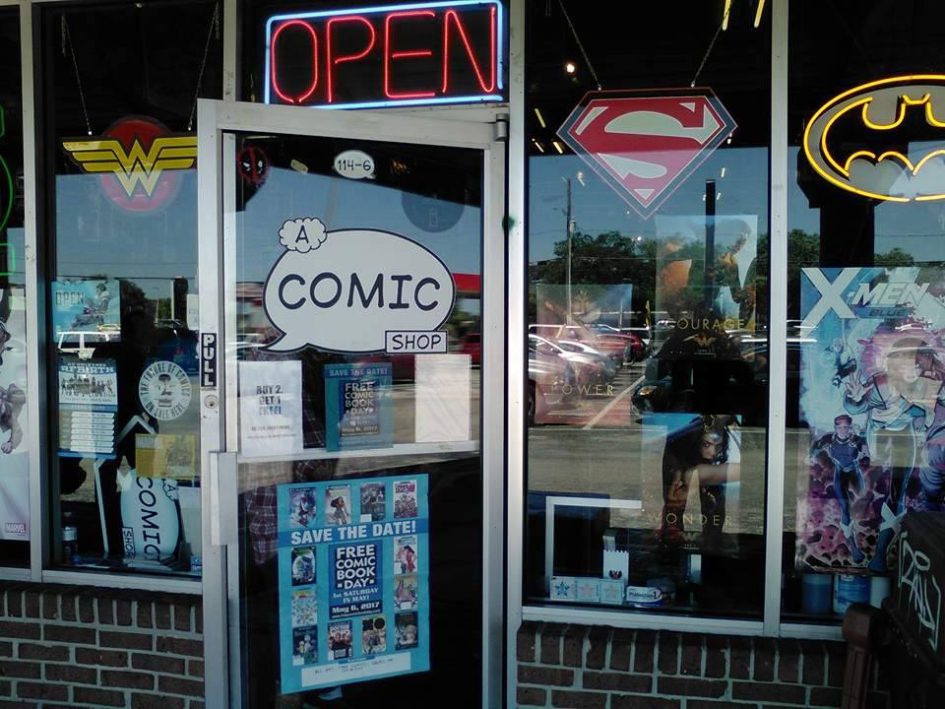 Aaron Haaland, owner of A Comic Shop in Orlando, FL, threw up his hands, “I’ve been up since 9 am getting ready for this.”

About how many people have you had show up?

“Pfft, I don’t know. I haven’t been counting. But people coming in and out, all day, it’s been a LOT.”

The independent comic book store is crowded. I spot DC and Marvel t-shirts on most of the patrons making their way up and down the aisles. I can pick out the black T-shirts of the employees stationed throughout the store. More than usual. All hands on deck today. There is a model dressed as the New 52 Wonder Woman, handing out flyers. Customers at the check out counter are three-deep. Two employees frantically work the registers.

Aaron is directing traffic with a replica of Thor’s hammer that glows. He’s broad shouldered and blond, like the God of Thunder, but doesn’t have the same hair and lacks the beard. He’s enjoying being at the center of the excitement and has a grin on his face.

“Ha ha, yeah.” He sets down Mjölnir when I ask for an interview. I don’t know if I’m worthy enough to pick it up. 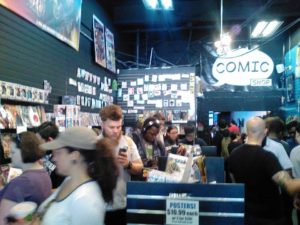 What else do you have going on today?

“Well, we’ve got the sale,” he points to one of the many Buy Two, Get One Free signs adorning the shelves. “Buy comics!” he shouts to the crowd, with a smile. The closest customers shout and cheer back at him.

“We also have Space Ghost (George Lowe) coming on the 28th, and tonight we have cosplay karaoke… but I won’t be here for that… I’ll be asleep!” he chuckles, the happy sort of exhaustion.

And what’s going on in the back? I indicate the Geek Easy (a speakeasy bar for geeks) at the back of the store, where many patrons are funneling in and out.

“Oh, we have a fighting game tournament going on today. Street Fighter. Marvel vs. Capcom. All kinds of fighting games.” 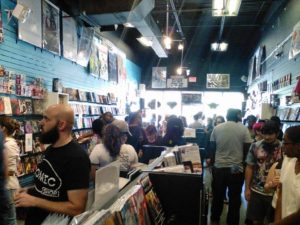 It’s as if Aaron is hosting the coolest party in town. We exchange some more pleasantries, I thank him for his time, and head back to the Geek Easy to check things out. Two women are sitting at a table at the entrance, enrolling contestants. There’s a sign with participation fees on it and also a line that says…

“Spectator fee?!” The tall dude in front of me is incredulous. He points to the $5 charge.

“Well, if you want to stay all day and watch,” one woman explains. “But if you just wanna go in and have a quick look around or check it out, that’s fine.”

The place is packed. I move left toward the bar, along one wall. To my right, all the little tables in the room have monitors showcasing turbo-fast fighting games. On the far wall, projected onto a giant screen, is the latest Street Fighter game. A half moon circle of spectators are congregated around the action. I don’t stay long. My dad and I are going to catch a showing of Guardians of the Galaxy Vol. 2 in about an hour. I head back to the front of the store and select from among the free comics: Marvel’s Secret Empire, Rick and Morty, Wonder Woman and Guardians of the Galaxy. 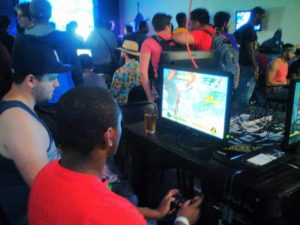 I indicate the comics I’ve selected to the employee behind the counter, but he waves me on with a “You’re fine,” when he sees I don’t have anything to purchase. He’s still got lots of customers in line.

I head back out into the Florida afternoon humidity. I pause briefly on the sidewalk in front of a life-sized cardboard cutout of the Tenth Doctor and read the word balloon attached announcing Free Comic Book Day.