The Walking Dead: Book One 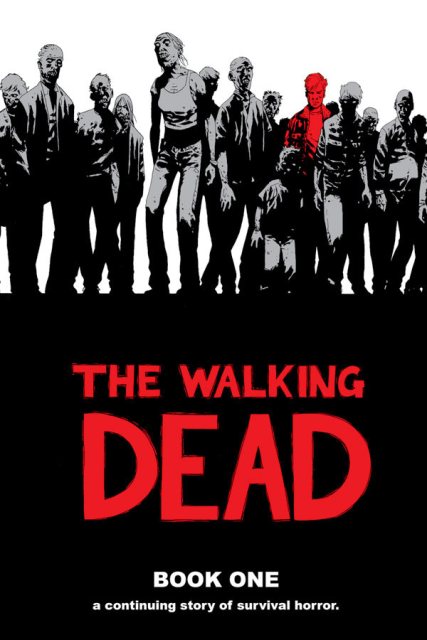 In terms of storytelling, it’s time to head back to square one!

After totally catching up on Season Four of AMC’s The Walking Dead TV series, I thought it would be a good idea to go back to basics: Robert Kirkman’s original graphic novel!

The Walking Dead: Book One is an oversized hardcover book that collects the first 12 issues of the series, along with their covers on full display. This is where the survival horror all began. Starting back in 2003, Kirkman employs minimalist storytelling. This black-and-white graphic novel is a quick read, especially since the characters don’t do a whole lot of speaking. There’s quite a bit of action and plenty of ghoulish fiends!

It’s all here:
– the almost-fatal wound that sent Rick Grimes to the hospital
– Carl getting shot in the woods, leading Rick’s Gang to Hershel’s Farm
– Rick’s Gang ditching Hershel (with Glenn and Maggie)
– arriving at The Prison in the very last frame

There’s plenty of differences between the graphic novel and the TV show, with the main one being various characters mentioning the word “Zombies,” which almost never happens in the AMC adaptation. At one point, Rick labels a couple of undead wanderers as “roamers,” but never are the words “biters” or “walkers” mentioned in the first 12 issues.

More differences between the graphic novel and the TV show:
– Rick almost immediately finds his family
– Allen seems to be hearing random voices in his head
– Tyrese gets introduced relatively quickly
– Rick’s Gang continues camping through a tough winter
– Glenn’s crush on Carol ends when Tyrese arrives and steals her heart
– Hershel doesn’t seem to be a preacher
– Maggie has quite the mouth on her
– So far, there’s no sign of Merle or T-Dog, yet

The first half of the book is listed as Days Gone By, which depicts the very beginning of the storyline, up until the point where Carl kills Shane. I was surprised at how little the madness of Shane was explored. The second half is labeled Miles Behind Us, which begins with Rick’s Gang on the road — everyone loads up into the packed RV — eventually arriving at the gated community of Wiltshire Estates, thinking they’re in Heaven, before arriving at Hershel’s Farm.

The graphic novel includes plenty of tidbits that may have been hinted at — or totally ignored — in the TV show, including how Rick and Lori originally met or that originally, the Grimes family lived in a small town in Kentucky (also where Kirkman is from). As a great post-Apocalyptic storyteller, Kirkman has created two great undead franchises in The Walking Dead and Marvel Zombies.

Mid-way through the first half, I found one typo: “Maggy” is misspelled, which I found weird, especially since Glenn is screaming her name as the barn walkers escape. Whoops.

Also included in the book is the 2005 Holiday Special, which is a short story featuring Duane and Morgan Jones.

Overall, diving into The Walking Dead backstory is an engrossing experience. I’m looking forward to moving ahead of the TV series, in terms of storyline. I only wish I’d have jumped in so much sooner.

Strength: Great storytelling, great action.
Weakness: Sometimes the fine details feel like they’ve been missed.
WTF Moment: Rick initially tries to talk some sense into the walkers… not exactly getting any results.

Notable Quotes:
– “Everything’s so damn hard.”
– “I don’t think I’ll be rubbing this shit on my face anytime soon.”
– “Those things are slow as Hell, so you should be able to maneuver around them.”
– “If it ain’t about cartoons or passing gas… my boy don’t want to talk about it.”
– “Rick and I are the most compatible people on Earth. We are perfect for each other…”