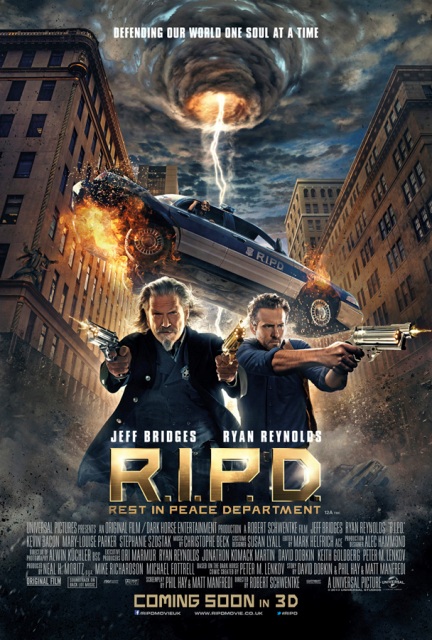 Per Matt:
In preparation for R.I.P.D. I took the extraordinary measure of getting ripped, for our Redbox Review.

This review is going to be a little different. Since the theatrical release of R.I.P.D. was an utter and complete disaster, I thought I’d get a little hyped up before watching the movie. After a few beers and a couple of ramakens of hot sake at a local Japanese restaurant (as well as a full dinner), I’m ready to jump into the Rest In Peace Department.

As detectives for the Boston Police Department, Ryan Reynolds and his partner, Kevin Bacon, ran across a cache of gold during a routine drug bust and ultimately keep it for themselves. When Reynolds threatens to turn himself in, Bacon decides to kill Reynolds and keep it all for himself. Given the choice to join the R.I.P.D. or face judgment as a crooked cop, Reynolds decides to return to Earth. As he soon learns, deados (aka evil spirits) would have overrun the world by 1954 without the R.I.P.D.

Reynolds is paired with Jeff Daniels’ undead cowboy from the 1800s — who is the only saving grace in this movie He is a hilarious relic in today’s environment, even though he inexplicably speaks as if his mouth is full of marbles. Together, the two investigate the origins of the gold stash… and then all hell breaks loose.

So, the main question remains: Is this really Men In Black with ghosts, or is this an unfunny copy of Ghostbusters? Why did this movie an utter critical and commercial flop? Is it the Ryan Reynolds jinx? Perhaps. I was expecting a cheesy PG-13 comic-book adaptation and that’s what I got.

The one thing I did like a lot: the song Konichiwa Bitches performed by Robyn.

There are lots of special effects in this flick… sometimes way too many for the storyline. I had no real investment in the characters and couldn’t care less whether they win or lose. Although I desperately wanted to like the movie, as I tend to enjoy practically every comic-book based movie, I was totally disinterested in this one. I am kind of interested in reading more of the comic book series, but prefer not to see Ryan Reynolds (and his comic-book adaptation kiss of death: X-Men Origins: Wolverine, Green Lantern, R.I.P.D.) in any other comic-based property (history predicts a disaster for his upcoming film, Deadpool).

Strength: Jeff Daniels’ ridiculously old-school cowboy.
Weakness: Pretty much EVERYTHING!
WTF Moment: When you return to Earth after death, you receive an avatar: Daniels a sexy blonde, Reynolds an old Chinese man.