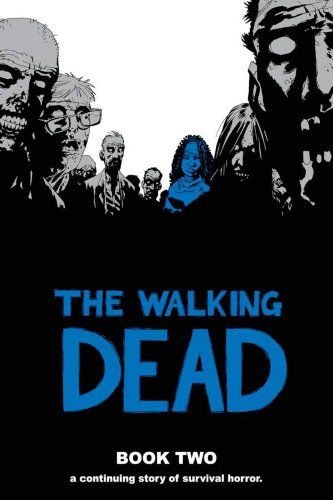 Oh, the weather outside is frightful… so it’s time to cozy up to a good book!

The Walking Dead: Book Two picks up directly where Book One ends. Rick’s Gang had split up, with some sticking around Hershel’s Farm and the majority leaving with Rick, who has discovered The Prison. But, now what?

Robert Kirkman’s minimalist storytelling continues in The Walking Dead: Book Two, an oversized hardcover book that collects the second 12 issues of the series, along with artist sketchbook and individual comic-book covers on full display (it’s the only thing within the book that has color).

Chapter Three starts with Safety Behind Bars, which finds Rick’s Gang cleaning out The Prison and discovering a surprise: four former inmates — Dexter, Axel, Andrew and Thomas — all locked inside the Cafeteria… along with piles of uneaten food that could feed hundreds. Rick’s Gang replenishes with this newfound food but both sides are uneasy with the other.

After revealing the outside-world situation to the inmates, I found this line amusing, “We’ve taken to calling them Zombies, I guess, though it was a while before we could say it with a straight face.”

Rick feels a tug on his conscience, so he returns to Hershel’s Farm trying to help the rest of the gang. Convincing them was easy since the location had been overrun by “roamers.”

Returning to The Prison, all sorts of craziness has gone down. A suicide-pact gone wrong, one of the inmates kills two of Hershel’s daughters and attempts to murder another and prison justice is introduced. On top of it all, Rick returns to Shane’s grave to qualify his assumption that everyone is already infected, which was correct. Rick puts him back down.

Chapter Four: The Heart’s Desire beings and Michonne appears out of nowhere, saving Otis. The Prison inmates create a shotgun standoff that ends with hordes of undead from Cell-block A released and more prison justice (aka cold-blooded killing). This Rick has never been in the TV show, but maybe should’ve been included.

As if it was possible for any MORE drama to break out, Allen is the first to get a limb chopped off (he eventually dies), Michonne becomes “the other woman” and a Tyrese-Rick duel to the death reveals each other’s secrets to the rest of the group. Because of this, the Prison Committee is formed, thus ending the Ricktatorship.

All in all, there’s LOTS of sexxin’ (and DRAMA) going on. Rick’s nine-page monologue wraps up the book with the grand admission, “We are the Walking Dead.”

Some differences in character I’ve noticed between the TV show and graphic novel:
– Maggie is a nymphomaniac
– Glenn’s shaves his head completely bald
– Carl isn’t as annoying as on the TV show
– Michonne talks to herself, possibly to an imaginary friend
– Andrea is a seamstress, fitting prison garb for the survivors
– Sophia’s still alive (she and Carl are a very young couple)

Without any editorial interstitials, the reader is often taken to different locations with characters speaking mid-sentence. The reader must try to catch up with the conversation, making it awkward to read. Also it is unclear where one issue ends and another begins, but that’s probably because this is a hardback collection of the individual issues. Still, I’d prefer a little more clarity.

Strength: So much drama inside The Prison.
Weakness: Awkward to read, at times.
WTF Moment: One inmate thought he was the cause of the Walker uprising, since he prayed for God to end his drug addiction and the next day they arrived… curing him as a result.

Notable Quotes:
– “Aren’t you pregnant enough?”
– “Never done it in a barber’s chair before.”
– “We were just getting the lay of the land.”
– “It appears civilization is pretty well screwed.”
– “Whatever they were shooting must be dead. Or deader.”
– “Have I gone a little crazy? Maybe — but so has the world.”
– “I ain’t going to be scaring these things away with my dick!”
– “I’m living life like every day could be my last — and it’s horrible.”
– “Rick, if we don’t end up staying here, I’m shooting myself in the face.”
– “I’m going to chalk this up to mood swings and funky pregnant woman hormones.”