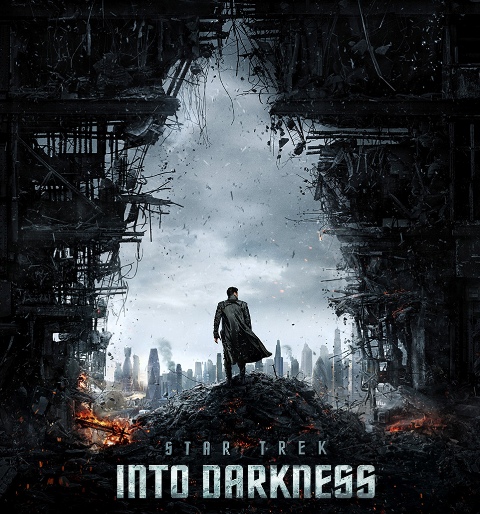 Per Matt
Boldly going where no geek dares, Star Trek Into Darkness weaves into and out of canonical territory, causing a stir among fans.

After much fan furor and debate concerning the rebooted storyline of 2009’s Star Trek, director J.J. Abrams does little to calm the crowd with its sequel. Not only does he continue rewriting classic characters, but this time around, he’s rewritten the best villain of the entire franchise: Khan.

As Star Trek Into Darkness opens, Kirk continues violating Starfleet regulations, risking Spock’s life and eventually losing the Enterprise. Believing in Kirk, Admiral Pike gets his ship back and fights for Kirk to be his new First Officer. But before they can deploy on any mission, John Harrison wages a one-man war against Starfleet, bombing a top-secret research facility. After he escapes, Kirk and his newly reinstated crew are sent the Klingon home world, Kronos, to seek justice… but instead may have started a war against a violent opposition they’re unlikely to beat.

Mid-way through the movie, we discover this “John Harrison” may be hiding a deadly secret that could be the downfall of everyone living in this alternate reality…

A complicated storyline dealing with honor, responsibility and redemption sums up Star Trek Into Darkness. Thankfully, there’s far fewer lens flares this time around by Abrams and company. I still don’t like the blond tips of Kirk’s hair and Uhura’s unnecessary f-bomb during an ill-timed lover’s squabble.

For some reason, I was VERY busy when this — the 12th Star Trek movie, also highest-grossing film of the entire franchise —
was originally released onto DVD and Blu-ray, most likely being out of town, attending a convention or some other live event. I’m glad I finally got around to watching it.

I really enjoyed watching Admiral Pike’s brief return as a great father-figure mentor for Kirk, but it was sad to see him go. It was also great to see Peter Weller back within the Star Trek Universe. His corrupt Admiral Marcus chewed up every second of screen time he had. I enjoyed his evil ways.

The Spock Prime reunion with himself was a classic, but brief, synopsis of Star Trek II: The Wrath of Khan. There were other great throwbacks to past Trek glory, including tribbles, the Klingon Death Grip and mind-meld, as well as a conclusion that paid homage (without ripping off) Star Trek II.

I did have major quibbles with a 300-year-old Khan having no problem adapting to technology of 2259.55. I also don’t quite understand Khan’s head-squeezing powers. It’s been a while. I guess I forgot he’s a supervillian. However, including the short voice clip of William Shatner’s Kirk did make me happy, though.

I experienced different emotions with this is being military mission, not a space exploration (much like Scotty’s protest). I wasn’t sure whether to like it for being an unusual situation Kirk and Crew were thrust upon, or to hate it, since it didn’t really follow the Star Trek canon. Either way, Kirk is always at his best when fighting hand-to-hand combat.

All canon-issues aside, I’m not exactly sure how Into Darkness’ ending changes things, but it was a good movie, probably a little better than Abrams’ first reboot. The alternate-reality canon is still a mess, though.

Notable Quotes:
– “Vulcans do not lie.”
– “The ship is dead, sir.”
– “That was an epic beating.”
– “Are you crazy, whoever you are?”
– “Khaaaaaaaaaaaaaaaaaaaaaaaaannnnn!”
– “You’re my new chief. Go put on a red shirt.”
– “I’m not gonna take ethics lessons from a robot.”
– “Sometimes I want to rip the bangs off his head.”
– “I’m expressing multiple attitudes simultaneously.”
– “Don’t be so melodramatic. You were barely dead.”
– “Dammit, man, I’m a doctor, not a torpedo technician.”