The Walking Dead: Episode 5 – No Going Back 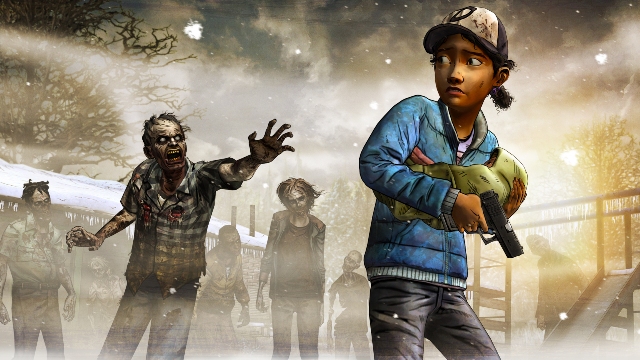 When it comes to creating great characters caught with making tough life-or-death decisions during the Zombie Apocalypse, no one can do it better than Telltale Games.

Season Two of The Walking Dead wraps with Episode 5, No Going Back. It’s safe to say this season finale packs some incredibly emotional punches, no matter what decisions you make.

After a shootout with the Russians and a poorly timed undead transformation — not to mention a crying baby that needs some attention — Kenny has been pushed to the edge and is in a very dark place. An unexpected return helps turn the tide, although a battle wound has slowed the troops from seeking shelter during a winter storm. All of this happens within the first few minutes. It’s a wild ride.

The Walking Dead focuses on Clementine, a little girl who feels like the voice of reason or the conscious of the group. She learns a little bit about life and survival techniques from each person she comes into contact with, throughout the series. The player can definitely see a change in Clem’s character, as she grows literally and figuratively, from Season 1 to Season 2.

The secret to Telltale’s success is tailoring the story to the way the user plays the game, making multiple replays a necessity. In my playthrough of the game, the ragtag group of survivors is forced to follow a Russian kid who may or may not be leading them to a shelter filled with supplies. Along the way, they must cross a frozen lake while being followed by walkers. This scene was one of my favorites. Not only do you have a bickering group of hungry survivors tip-toeing along the ice, hoping not to fall through the cracking foundation, but you have a menacing enemy proceeding to slowly chase you down, hoping to grab you when you’re not paying attention. So much drama!

Unfortunately, two members of the group fell into the water and died. The scene was brutal, but it reminded me of a time when I was younger and fell through a frozen pond while walking on it. Fortunately, I climbed out of it, but the memory haunts me to this day.

The group continues to seek shelter, but the infighting is never ending. Basically, it feels like an ordinary family!

Missing the fallen members of his family (Duck, Katjaa and Serita), Kenny switches gears, turning into full-blown parent mode. He basically becomes the guardian of Rebecca’s newborn child, vowing not to make the same mistakes he previously made with past family members. This element of his character is the greatest change in the entire series. The misery never seems to end for Kenny, even though he’s a sympathetic character. This baby — named Alvin Jr. — has briefly brought him hope. In his own way, Kenny is trying to keep the group together, for the baby’s sake.

Once he repairs an escape vehicle, Kenny and Clem search for Wellington, a supposed refuge for survivors. Unfortunately, more bad news awaits them when they arrive.

All of the achievements and trophies for Episode 5 are game related and are unmissable, so enjoy the game without stressing out too much, OK?

Overall, No Going Back felt longer than the other episodes. It also felt more rewarding than the rest. At times, Kenny’s a desperate social outcast who only looks out for himself… but whenever Clementine is around, his bad attitude melts away. It’s taken some time, but Kenny has proven his worth to the group (and to himself), even if his actions sometimes lead him into even worse situations. I also really enjoyed the loner, Jane, who is fighting her own demons throughout the season.

While I’m not sure if it was either a dream or a flashback, but as soon as I wrote, ‘I keep pulling for a flashback with Lee,’ it actually happened. It felt like a deleted scene from Season 1 and had a lot of emotional weight. I’m very happy it was included. It felt appropriate for the storyline.

If Season 1 was centered on Lee’s character, Season 2 feels like a redemption of sorts for Kenny. And that’s a good thing. It was easy to root for Lee in Season 1, but for Season 2, it was both tough to pull for and against Kenny. That’s some really good story writing, Telltale! I never thought I’d say it, but Kenny really does pull at our heartstrings!

I really do like the character, even if he’s incredibly complicated. As a matter of fact, for my Final Decision, only 13.5 percent of players agreed with me to stick with Kenny, hoping to keep some semblance of family during the Apocalypse, because that’s the way it ought to be.

Although they’re two completely different types of games, Telltale Games has created two great point-and-click franchises with The Wolf Among Us and The Walking Dead. Both adventure games offer something different, and I really did enjoy The Wolf Among Us, but I prefer the depth of The Walking Dead so much more. There’s no telling where Season 3 will take us, but I’m already hooked and can’t wait for it to arrive!

Strength: The emotional attachment of both seasons made it easy to root for Kenny.
Weakness: Kenny’s wild ways made it easy to be the hero and the villain of Season 2.
WTF Moment: Lighting a fire next to so many danger and high-voltage signs doesn’t seem safe at all.