Per Matt
Jeremy Ambler knows a thing or two (or three) about the undead.

Not only has he been a featured Zombie in The Walking Dead, but Jeremy has also appeared in other undead roles, as well. At the Lexington Comic & Toy Convention, Jeremy joined me for an interview to discuss Zombie School, cemetery Zombies and taking on professional wrestlers!

Please tell me a little about working on The Walking Dead.
– “When I first started out, I knew it was going to be a big deal. Season One only lasted for six episodes, but after that, it kind of ballooned. Originally, they’d wanted me to be on Season One. At the time, I was working on something else and I couldn’t do it. So, when Season Two came around, I actually went to Zombie School with Greg Nicotero. Basically, I learned how to walk like a Zombie. I showed him what I could do, as a Zombie. It was just a one-day thing, but Greg pretty much makes the decision of what you’re going to be doing: If you’re going to be featured or if you’re going to be in the background.”

“I was a featured Zombie in episode one of Season Two. I was the co-leader of the highway herd. After the highway leader gets stabbed in the neck by Daryl, there’s a scene where the camera pans and it shows me leading the rest of the Zombies. There’s some close-ups of me bumping up against the water truck, when Glenn and Shane are underneath. I was also in episode 13, where I get shot in the head by Jimmy (Beth’s boyfriend).”

What was the episode Greg Nicoterro originally wanted you to be in?
– “I’m not sure. Until you actually go to Zombie School, he makes that decision. I’ll never know.”

Not everybody gets to attend Zombie School. Was that only offered once a season?
– “It was held for a couple of days, before they started shooting. I think I was there the very first day of it.”

Who’s your favorite character on The Walking Dead?
– “I know everybody on a personal level, beyond their characters. I don’t really have a favorite character. All of them are such wonderful people to work with. It’s like having a second family. When we see each other, out at cons, it’s like everybody knows each other.”

How about your favorite character in the graphic novels?
– “To be honest with you, I’ve never read them. I have looked through them. I know what they’re all about, but I haven’t read them.”

Tell me about some other projects you’ve worked on.
– “I’ve been in lots of other things, as well: The Road with Viggo Mortensen, Harold & Kumar escape from Guantanamo Bay, The Crazies and Killing Lincoln.”

What are some upcoming projects you’ve worked on, about to be released?
– “The Town That Dreaded Sundown, which is a remake of the 1970s film, in which I play the gas station attendant. Wrestlers vs. Zombies, which stars Rowdy Roddy Piper and Hacksaw Jim Duggan — I’m actually a featured Zombie in that. It seems like my career keeps going and going and going. I mean, I have a lot of downtime, but doing conventions keep me busy, as well. It’s definitely been a blessing.” 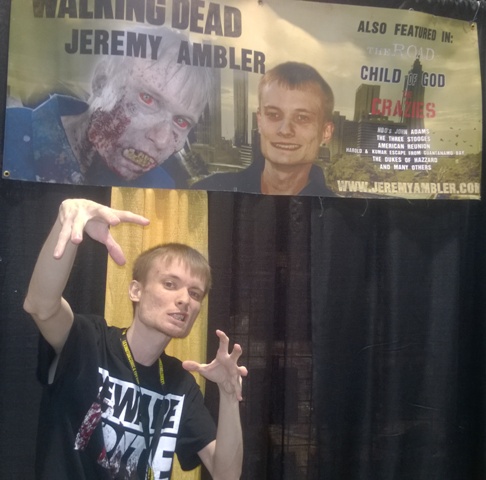