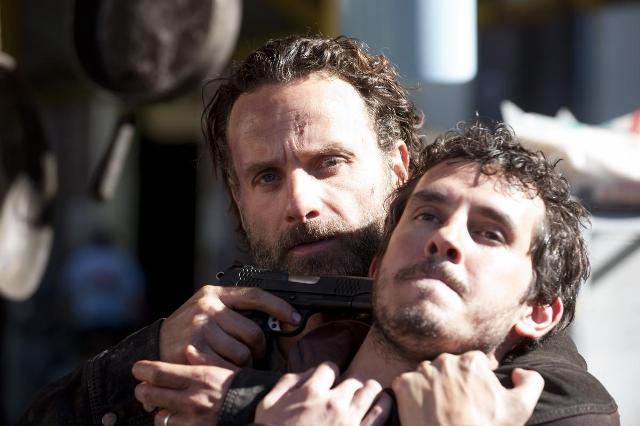 This Just In: The Walking Dead is popular.

Last week’s episode — which drew 15.7 million viewers — was the highest-rated finale in the show’s four-season history. It was also brought in 10.2 million adults between the ages of 18 and 49, which is the most-coveted audience in television. Immediately afterward, 7.3 million viewers watched the season finale of Talking Dead, which featured Showrunner Scott M. Gimple and superstar Andrew Lincoln (making his debut appearance on the show).

Just in case you missed any episode from the last half of the season, we run down the overall storyline:

Once The Prison was infiltrated by The Governor, all sorts of hell broke loose. Moving the story along and delving deeper into individual character arcs, all the main characters of Rick’s Gang separated. Becoming more and more like LOST (which isn’t a good thing), Robert Kirkman’s opus gets more flashbacks and possibly a couple of flashforwards. It feels like a cop-out. A lot of the storyline from the Mid Season Finale seems to get retconned with the remainder of Season Four: I was sure Bob and Tara were dead, Carol was to have an expected short lifespan on her own and I swore Lil Asskicker bit the dust when someone fell on top of her, while running. None of the above actually happened. So much for killing off useless characters.

After: #pudding
Also known as the cussing Carl episode, the kid acts too big for his britches and I’m not a fan. Hershel’s zombified, decapitated head yearns for human flesh and Michonne’s flashback to life before the Zombie Apocalypse — much like this entire episode — felt like a waste of time. “Who’s gonna open the wine?” More like who cares about this episode?

Inmates
“If you don’t have hope, what’s the point of living?” – Fleshing out the forced relationship between Beth and Daryl. Beth is totally delusional. Tyrese is on babysitting duty (I swore Lil Asskicker had died in the prison escape), which is hazardous to his health during the Zombie Apocalypse. Glenn and Tara make an effective team.

Claimed
This is the meet-up episode, where paths cross with others. While hunting for supplies, Carl’s the first of Rick’s Gang to learn Michonne’s secret (she had a child named Andre). Carl’s feeling guilty about missing Lil Asskicker and Rick’s out to lunch while his house is invaded. Sounds like a post-apocalyptical version of The Purge, if you ask me. “Eugene’s a scientist and he knows exactly what caused this mess.”

I don’t usually like newly added supporting characters, but I like this crew on a mission to D.C. What’s the secret behind Dr. Eugene Porter (other than his mullet)?

Still
Out on the road, silence is golden between Beth and Daryl… until she starts feeling frisky. “I can take care of myself and I’m gonna get a damn drink.” Conveniently finding an abandoned country club, Daryl’s redneck roots return and Beth still hasn’t grown up. Drinking games and hidden shame. Ho hum.

Alone
The episode opens with a fog surrounding the survivors, in an apparent callback to Frank Darabont’s The Mist. Daryl napping in a coffin? Hilarious. Daryl and Beth’s escape from the house in the dark felt like a George Romero movie. After sharing a moment, Beth is kidnapped and Daryl gets in over his head with a new gang.

The Grove
The Carol-Tyrese Caravan continues with a whole lot of talking… It seems Lizzie’s not right in the head, full of drama. I don’t know which is worse, trusting a little girl to hold a baby or an even smaller one with a gun. I can’t believe an entire episode is devoted to the crazy kids. What a waste of an episode. At least the new showrunner grew a pair and killed off not one, but both annoying kids in the same episode.

Us
Dr. Eugene Porter scores major cool points by discussing a possible undead dinosaur video game. He’s a nerd. He’s a geek. That is good. I had no idea that bayonets from The Revolutionary War will make a return during the Zombie Apocalypse. Maybe it’s a screen-used prop from AMC’s upcoming show, Turn. Look out, ebay! Glenn and Maggie share a moment and Rick’s Gang slowly reunites. All’s quiet at Terminus… a little too quiet.

A
Rick’s in bad shape: daydreaming and uncontrollably shaking. Via flashback — yet again — the Claimed Gang gets the jump on Rick and his crew, leading to a big, bloody mess. It’s a little hard to swallow the bad guys missed not one, but two shots at point-blank range, but this is TV make-believe. Michonne reveals how Baby Andre died in a refugee camp, Carl questions the truth and Rick’s Gang makes a grand entrance into Terminus. After introductions are made, all hell breaks loose. While the theme of the episode (and last half of the season) has been “Leave it behind,” not everything is as it seems in Terminus.

“They’re going to feel pretty stupid when they find out they’re screwing with the wrong people.”

The final half of Season 4 has definitely shaken things up quite a bit. No longer a whole, Rick’s Gang has separated into different groups on the road. Some of the main characters were featured for more than a few minutes. A few got their complex backstories a little more developed… others were a waste of time. A few new noteworthy characters were introduced, others entered and were quickly killed off. Terminus shares a similar feeling to that of Hershel’s Farm, feeling like an eye of the storm surrounded by the Zombie Apocalypse.

I really liked how the late-season episodes interlocked and crisscrossed at different points in time. I didn’t necessarily like all the exposition and wasted time on useless plot devices. I do like the crew headed to D.C. They seem interesting, full of different personality types. Denise Crosby (Tasha Yar of Star Trek: The Next Generation) is Mary, possibly the Den Mother of Terminus. She intrigues me as well. But wait, where’s Tyrese and Carol? They’re not at Terminus!

Our BOLD Prediction for Season 5: The meat is Soylent Green!

Tune in another six months for the next episode of The Walking Dead!