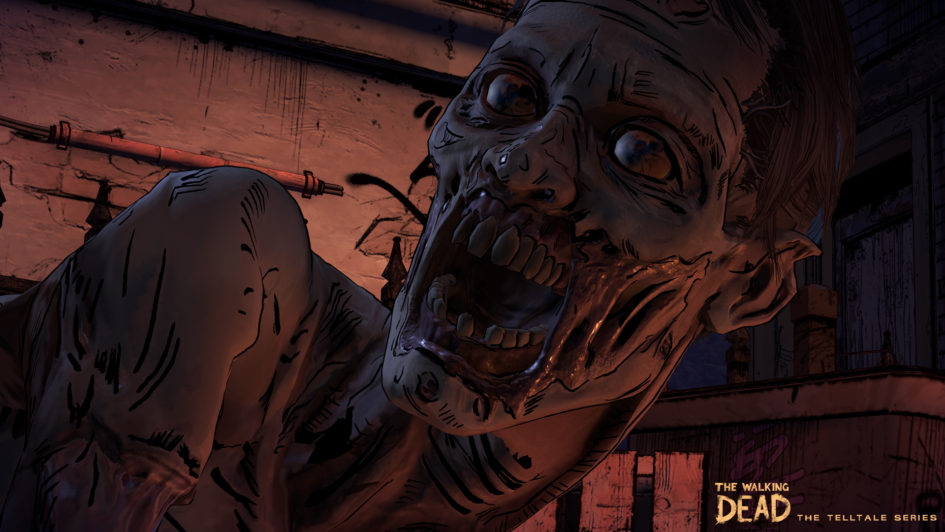 Welcome back to a new edition of #HauntLife. This week, sit back and check out my review of Telltale Game’s The Walking Dead: A New Frontier. I played it on PC through Steam, but it is also available on all the major gaming platforms and smartphones. This review covers the first four chapters of the story, as the fifth releases on May 30, 2017.

In this game, you take on the role of Javier Garcia, and the game begins before the Zombie Apocalypse begins. Javier’s life decisions have put his parents and family on the back burner, but Javier receives news that his dad is on his death bed. Frantically, Javier runs to their home, only to be greeted by his pissed off brother, David, who tells him it is too late: their father is gone. Soon after, his father revives a walker, biting Javier’s mother before he is stopped. With their mother bleeding, the family takes her to the hospital and the opening credits roll.

Months later, the only remaining members of the original group are Javier, Kate (David’s wife), Mariana and Gabe (David’s children). While scavenging one night for supplies, they are captured by a group of people, led by a man named Max. Javier is knocked unconscious, and when he comes to, he is captive in a truck on its way to an undisclosed location. Suddenly, the truck is almost hit by a tree falling into the road, causing them to wreck. As the driver escapes, Javier finds himself held at gunpoint by a girl named Clementine (from The Walking Dead: Season One and Two).

Agreeing to help Javier save his family, Clementine takes Javier to her home community of Prescott, where he meets Tripp, Eleanor, Conrad and Francine. After some convincing, Tripp and Eleanor go with Javier to save Kate and the kids. However, during the rescue attempt, Mariana is killed by Max and Kate is wounded, barely making it out. Francine is captured in the end.

Once back at Prescott, Clementine reveals that Max and his gang are part of a survivor group called The New Frontier. The group began as a peaceful group with good people, but lately has taken a more sinister turn.

As Kate is stabilized, Max and his main sidekick, Badger, show up at the gates of Prescott with Francine. They want Javier, and will exchange Francine for him. However, negotiations turn bad. Francine is killed and a Zombie horde is unleashed by The New Frontier on the citizens of Prescott. Only a few people make it out alive, including Javier, Clementine, Kate and Gabe. Though they made it out alive, the walker horde separates the group. Kate and Eleanor head for Richmond, VA, where Clementine had heard of a survivor camp. The rest of the group meet up with Jesus Monroe, who offers to help. As they explain they want to go to Richmond, Jesus explains that The New Frontier controls it. Fearing Eleanor and Kate are headed for trouble, the group makes haste to rendezvous with them.

Just outside the gates, Javier’s group meets up with Kate. She is not doing well from her injuries, so the only choice they have is to try to get help inside. Demanding entry, Javier is met by Richmond’s chief of security, his brother, David.

David brings them in, and sees to it that Kate receives care and treatment. He shows Javier around the town and introduces him to Ava, his second. David takes Javier to meet the leadership council for The New Frontier, which includes David, the doctor, Joan and Clint. Hoping to convince the council to let Javier and his group stay, David is interrupted by a returning Max and Badger, who accuse Javier of stealing and murder. While David believes Javier’s side of the story, Joan is not convinced and orders Javier and team to leave Richmond. Given a small amount of supplies and a map made by David showing the location of a supply warehouse, Javier leaves the group behind as they are preparing to leave.

Javier and Clementine arrive at the warehouse and are met by David. Clementine immediately distrusts David, as she remembers him taking an infant named AJ from her and banishing her from The New Frontier in the not-so-distant past. David explains that AJ is alive and well inside Richmond, putting her at ease. Suddenly, the group hears Max, Badger and their gang inside the warehouse. While eavesdropping, the group learns that the NF gang has been taking supplies by force from other communities, like Prescott and Hilltop. Attacking, Javier is able to kill Badger and capture Max, who tells David that the attacks were ordered by Joan.

Returning to confront Joan, David is accused by her of being a traitor and conspiring with Javier to overthrow the council. David is sentenced to death by hanging the next day. During the night, David is able to escape and finds the rest of the Prescott survivors. They plan to save David, convince the citizens of Richmond that The New Frontier has gone rogue, and save Kate, who is being held by the doctor in his ranch.

Upon arriving at the doctor’s ranch, the team is able to save Kate. The doctor offers them information on The New Frontier in exchange for a merciful death by lethal injection.

The next day, in the public square, David is led out to be executed. Joan calls out Javier, and reveals that she has both Tripp and Ava from Prescott. Given a choice of who lives and who dies, Javier’s decision is disregarded by Joan, who kills Ava (I picked Tripp to live). Clint, the other council member, begs Joan to find a peaceful resolution. A firefight begins as Javier saves David. Immediately, David takes off after Clint and Joan as Kate crashes into the gates of Richmond with a stolen vehicle. However, the truck is hit with an Molotov cocktail, causing Kate to lose control and crashes into one of the walls of the town, making a large hole that walkers soon begin to invade through.

And that is were Episode Five will begin…

So, what do I think of this game, after spending most of my Memorial Day weekend playing it? You would probably think that, being The Walking Dead/horror fan I am, I would love it. But, unfortunately, I was not a huge fan of this game.

Let me explain. The gameplay is exactly what I have come to expect from Telltale Games. The “choose your own adventure” aspect of this game is very appealing to me, as if you play multiple times, the game changes some. The graphics are beautiful and the acting is on point. Nothing from a technical or gameplay perspective fails me on this game.

The failure I have comes from the storyline. Playing this adventure felt like a walkthrough the last season of the TV series. All you need to do is change Richmond to The Sanctuary and Joan to Negan and you have the basic storyine. Now, I know that Rick never went to Negan looking to live with him like Javier did to get Kate rescued, but the whole vibe just felt the same. I knew what was coming long before I even got to Episode Three. It was too predictable from a story perspective, and such I found myself choosing responses in the game that would follow that story arc. Really, it was not appealing to me, as it’s all been done before.

I am hoping that when Episode Five releases, I am pleasantly surprised with an “OMG I didn’t see that coming” ending. Maybe it will be revealed that AJ, the infant, is the secret boss baby behind everything. Or we see the rise of Negan and his Saviors. But without something like that, this game will suffer.

I give this game three out of five stars for the first four chapters. Once Episode Five releases and I get to play through, I will add my final review. My suggestion for this game is to wait for it to go on sale and then pick it up. It’s a good game, but very very predictable.