The Miss P Trilogy Checks Out With Library of Souls

It is true we live in a strange world, but the imagination of author Ransom Riggs is particularly peculiar. In Book Three of his first series of novels (nicknamed Miss P by his fans), he has created an astounding one where children with special abilities hide in plain sight away from the perils and persecution of normal folks, but their lives are also on the line as they are hunted by a strange, paranormal menace.

As a teenager, Jacob Portman learns the fairy tales he was taught by his Grandfather are more real than he could have possibly imagined. Young Jake discovers his family’s past while while learning about his newfound abilities during an eye-opening adventure with a group of peculiar children. Against all odds, in Hollow City, Jake attempts to save the lives of Headmistress Alma LeFay Peregrine, along with those of his new friends, before experiencing an epic cliffhanger. Library of Souls is the conclusion of this novel trilogy that showcases a battle for immortality, as well as a yearning to fit into society while simultaneously being unique.

Book Three continues the complicated storyline of Jake and Emma Bloom, his love interest. While the book is technically classified under the Young Adult genre, don’t let that scare you, as it doesn’t feel like it’s aimed at the tween and teenage crowd. Fun to read, the book is easy to enjoy by peculiar (and normal) children of all ages. The supernatural aspects of Library of Souls get a little complicated as it’s sometimes difficult to remember the differences between hollowgasts and wights, not to mention the many different characters that are integral to the storyline, but it’s not a dealbreaker. The hearts and souls of these characters shine brightly and it’s easy to cheer on the good guys, along with rooting against the bad ones.

“No one can hurt you as badly as the people you love.”

While Book Two strayed a bit from Riggs’ original format, almost feeling like its storyline was forced, we’re happy to report that Book Three got back onto the right track, eventually vindicating the series. The main character must deal with lots of firsthand tension, panic and terror as he’s experiencing life in an all-new world. Stress, grief and lots of family drama also hinder his adventure, but overall, it’s an enjoyable story. The only complaint of this book lies with the vintage photographs. It felt like this book included more pictures than all previous books combined. There may have been too many included this time around, actually taking away from the imagination of the reader. Also, the pictures are not spaced well. For long stretches there are none. Some are found deep into the book, closely followed by many others. The story would have been helped if they were spaced out better. 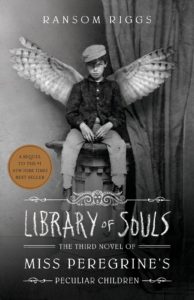 It has been stated before, but Miss Peregrine’s Home for Peculiar Children was very influential for creating Zombies In My Blog. It was a daring book that included vintage photographs to help depict a fictional story. It was a concept that had never been attempted before and was an incredible debut for Ransom Riggs. It quickly became a New York Times bestseller and later it spawned two sequels, along with a graphic novel. Most recently, Tim Burton directed and produced a big-screen adaptation of Riggs’ story and an art book was also released (which was far better that the actual movie).

Overall, the Miss P trilogy explores the minutia of family dynamics and the concept of normalcy as a whole, wondering aloud if these are even remotely possible during this day and age. The storyline is extraordinary and Riggs’ imagination and nightmare creatures are one of a kind. Library of Souls gives us hope for more fantastic storylines, because later this year, the next chapter of a new peculiar trilogy will be published. As always, we will stay peculiar.