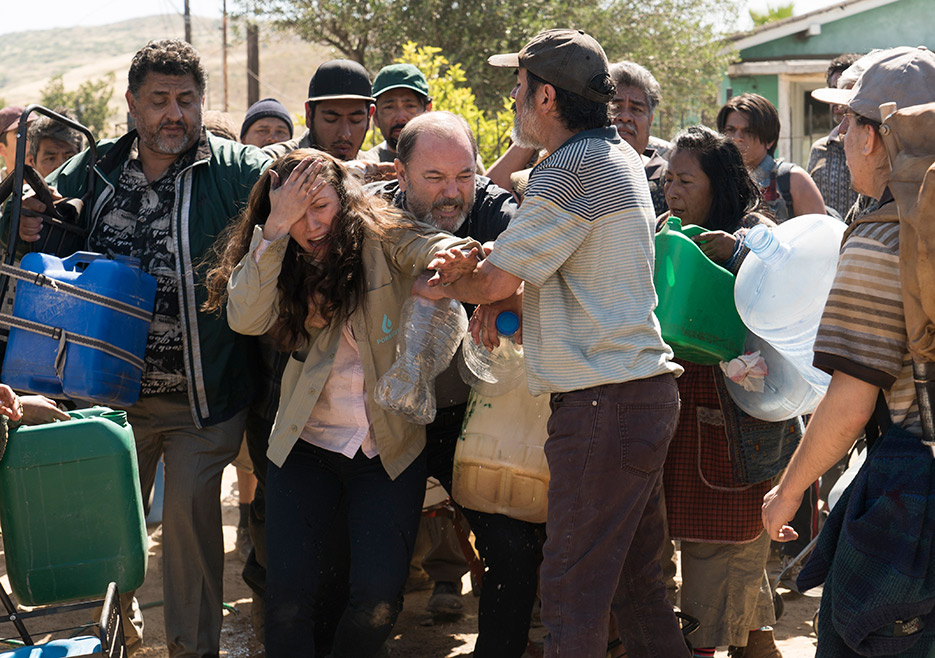 “Death Is Not The End” appropriately plays in the background as the two-hour mid season premiere of Fear The Walking Dead begins.

Season 3 continues with repercussions and aftershocks. Earlier this season, Nick killed Jeremiah Otto and Madison brokered a truce between the warring factions. While The Nation moves into Broke Jaw Ranch and Qaletaqa Walker seems like he’s in charge, she’s secretly pulling the strings behind the scenes. Ofelia’s reunion with the Clarks has been a rocky one, while the Ottos, along with the original survivors, feel like they’ve become prisoners within their own home.

Troy would rather risk his life before giving up his weapons. A firefight ensues and Nick’s caught up in the middle of the action. Sacrificing his BFF status, Nick reveals his deep, dark secret, before Troy is sent into exile, forced to live upon the wasteland.

Back at the dam, Daniel’s helping Lola distribute water… and hope among the survivors in Mexico, before they get too greedy and it all falls apart. Taqa and Madison hope to secure a backup source of water, with rations dwindling at the ranch, sure to expire within six weeks. Taqa and Madison travel together to barter at the bazaar, instead they run into Strand, getting beaten by Proctor John and his thugs, owing them a large debt. The trade falls apart, but Strand’s freedom has been bought off. Now they’ve got a better plan to fill their semi truck with water: To the the dam they will go, where a rocky reunion with Daniel surely awaits.

While Taqa’s been away, trust is broken by all parties; Nick’s been anointed the new head of the ranch’s militia. And the people on both sides are suspicious and paranoid. Naturally, the episode wraps with a cliffhanger.

“The whole world is lost.”

Finally, Fear returns from its hiatus, and now the TV show feels less like it’s telling individual stories, which spread the main characters a little too thin — thank goodness that’s no longer the case. Now, it feels like everyone’s storylines are actually coming together cohesively, with the group dynamic taking center stage (this wasn’t always the case), even though the storyline of Old Man Salazar — still the best character on the show — has still sadly been regulated to the smallest allotment of time. That needs to change, ASAP. And after watching the preview to next week’s episode, he may finally get the spotlight. Rejoice!

The beginning of the season portrayed Jeremiah Otto as the primary antagonist, but now it feels as if all of the main characters are anti-heroes, colored a hazy shade of gray, both being good and bad simultaneously. While that seems like sympathizing with the enemy, that type of writing makes the audience feel a sort of connection with the characters. Almost like these people are keeping it real when all the shit actually hits the fan and the Zombie Apocalypse happens. There is no good or bad, black or white. Only something in between.

With so many different plots being depicted within these two episodes, there wasn’t enough time to kill off any of the main characters… but a supporting one was basically given a death sentence. R.I.P Terrance, we hardly knew ya.

Prediction: Troy will return from exile island before the season finale, helping the preppers overthrow Taqa, before getting killed off. And creating an even bigger problem. But not before getting a big kiss from Madison.

Fear The Walking Dead returns next week with another all-new episode on AMC.