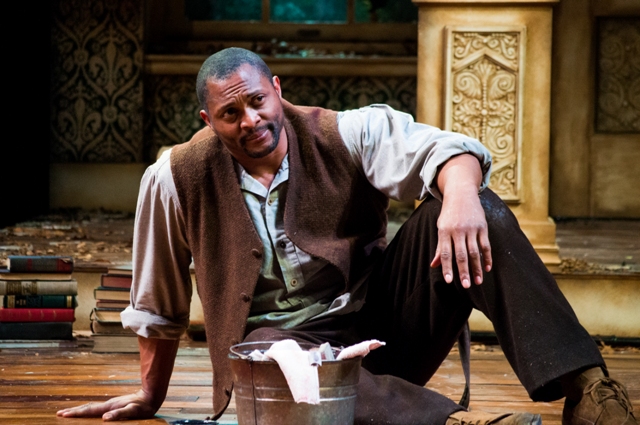 Presented by Nashville Repertory Theatre and appearing at the Tennessee Performing Arts Center from February 7–21 in the Andrew Johnson Theatre, The Whipping Man reveals a complicated story rooted in the Deep South.

During Passover of 1865, Confederate officer Caleb DeLeon (played by Matthew Rosenbaum) returns to his home in Richmond, Virginia. The Civil War has ended and his home has been destroyed. Even though Caleb’s family has deserted the property, his former slave, Simon (played by former Tennessee Titan Eddie George), remains as the caretaker, awaiting their return.

Battered and bruised, Caleb requires medical assistance. When John appears (played by James Rudolph), the two former slaves attempt to nurse the wounded soldier back to health. After amputating their former-owner’s leg, the three men try to survive together, all the while uncovering dark family secrets that have haunted them throughout their lives.

Wrestling with their past, the three men explore their changing relationships, while hoping to create a better future.

This three-person ensemble was written by Matthew Lopez and directed by Rene D. Copeland. All three actors are native Nashvillians and none of whom have performed with Nashville Rep before. Each of their characters represent familiar personalities which everyone should be able to recognize. Rosenbaum’s Caleb is running from his faith and his past, Rudolph’s John is the wild-and-unpredictable family member and George’s Simon is the older-but-wiser voice of reason, among the group. Together, they compare the trials and tribulations of ancient-Egyptian slaves to those of the United States’ past.

The Nashville Rep has assembled a powerful play that evokes a ton of emotion, especially in the second act. During their Seder, the actors convey a mood swing, ranging from appreciative joy to immediate rage. In fact, Eddie George is quite impressive on stage. Not only does he reveal a relatable character, but he can sing pretty well… and he even gets to tackle his fellow actor on stage (He’s still got it!).

With a ravaged-mansion set that looks incredibly authentic — complete with dripping water in the background — The Whipping Man transports you to another time and place, where everyone has their own demons to hide.