Jillian Bell as Eleanor in GODMOTHERED, exclusively on Disney+, sliding down a snow-covered hill in a fairy godmother dress.

My little girl is in love with the idea of fairy godmothers. After watching movies like Cinderella and Sleeping Beauty, she is totally convinced that we have good godmothers around us, dedicated to trying to make our lives easy, fun and beautiful. When I ask her why they do this, her answer is, “Because they love us.” And when pressed further, she says, “Because we all deserve to be loved.”

Out of the mouths of babes…

I, on the other hand, do not share the same views of the world. I remember when I used to believe very much in fairy tales. But that innocence has long been lost. I have become jaded by the world, realizing that there is both good and bad in the world, and they both have equal strength. Sometimes, you get the evil set upon you, making every single day of your existence sad, exhausting, stressful and/or anger inducing. But sometimes, the blessings of this world show themselves to you and put you on a cloud that lets you breathe easier and feel like you can take on anything thrown at you.

Fairy godmothers have been replaced with faith in religion for me. But with that faith comes the understanding that we will be put through trials and tribulations. And it is up to us to lean on that faith when needed, somedays more than others.

Oh, how I wish I could have her views of life. And how I hope they stay with her as long as possible.

Disney+ has released a new film somewhat based on the same premise of being jaded and hardened by the world around us. Godmothered is a fantasy comedy starring Isla Fisher, Jillian Bell and Jane Curtin. Based loosely on the idea of the fairy godmother in Cinderella, Godmothered focuses on Eleanor (Bell), a bumbling fairy godmother in training. One day, Eleanor is exposed to the news that her chosen profession is failing, and unless something happens, the need for fairy godmothers will be non-existent soon.

In a desperate attempt to save her profession, Eleanor ignores the directive of Headmistress Moira (Curtin), and heads to our world to help a young girl who wishes to find her Prince Charming, only to find that she has grown into Mackenzie Walsh (Fisher), angry and bitter at the fact her ex-husband left her and her children. It will take all the skills and powers of a competent godmother to change Mackenzie, but Eleanor will have to do.

The premise of Godmothered is good, but I think Disney missed the mark on it. Jillian Bell was perfect in her role as the inept godmother wannabe, but I think Isla Fisher’s character was not an equal. My meaning in this is that Eleanor was a complete bumbling fool on her part, and you would expect her to go against the meanest, nastiest, most hardened-to-the-world person you could find. A David and Goliath story, so to speak. But Fisher’s Walsh is only broken hearted. While Eleanor has a challenge, it does not feel as impossible as is meant in the story. Godmothered gives us a hard nut to crack, but hands us a hammer wrapped with a foam tip. All we need to do is remove the foam tip and get to cracking. 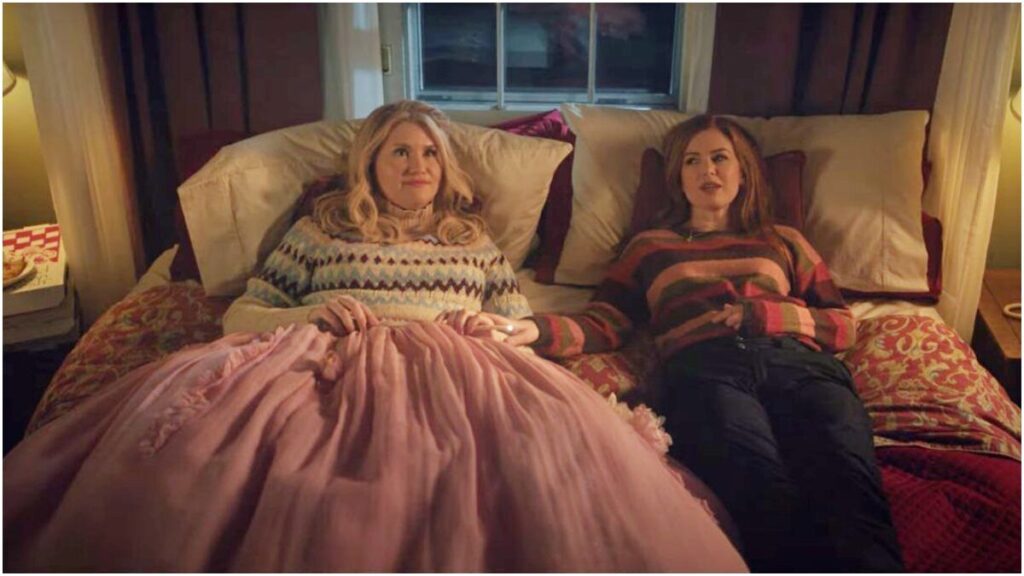 Godmothered is mostly predictable, but has the twists that makes it somewhat unique. The twist in this movie is what truly makes this a fantasy comedy and avoids the typical romantic-comedy trope. While I do not want to give away the climax and ending of the film, because it should be seen by those who need a little brightness in their lives, the film does take a turn down a different road than most would expect. I found myself in the “Wait… what just happened” moment a couple of times, leading me to rewinding and watching several scenes over again.

I am not saying this is a bad thing at all. In fact, it is a welcomed thing in films. I want to be surprised or having to question what I just saw and/or heard. Movies that do this are few and far between. Godmothered is one of those films that breaks the norm when you least expect it.

Despite its problematic theme, Godmothered is a fun, heart-warming film that families will love. I give it a solid four out of five stars. While the film does not show a heroine break insurmountable odds, it does deliver a good story that is sure to put a smile in your heart. Check it out on Disney+ starting December 4th, 2020 and throughout the holiday season.