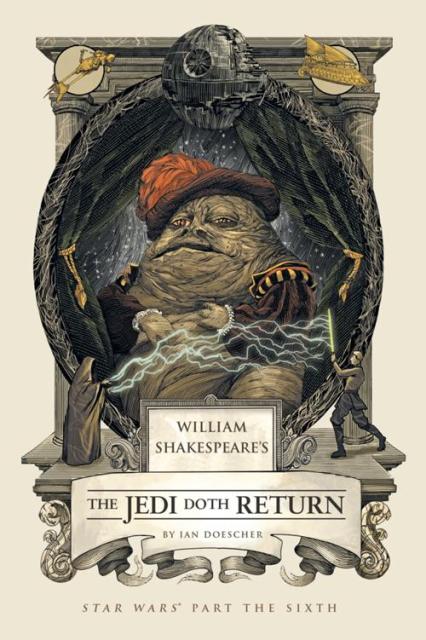 The whole gang’s here in a space opera made true,
Full of bounty hunters, scoundrels, Rebel scum and R2.

As if told like a Shakespearean play,
George Lucas’ story is divided into multiple acts,
Featured are some characters who might say,
Destroyed is the fourth wall, that’s a fact!

Dost thou require minor characters featured in great scenes?
They are hither, stealing the spotlight. Readeth the book. You will know what I mean.

The Max Rebo Band singeth a song touting the virtues of being a gangster,
A saddened Rancor Keeper mourns, as if losing his prized pet hamster,

But one scene I really could have done without, it is true,
Luke argues with Obi-Wan Kenobi’s ghost about one’s point of view.

Scattered about the book there’s plenty of rhyming couplets and quatrains,
All of the individual elements really come together, my joy is hardly restrained.

My favorite aspect of the book was not porous,
But hearing the scene’s action described by the chorus.

For characters R2-D2, The Rancor and Salacious Crumb,
Speaking English is odd for them all, even though they are not dumb.

Notable Quotes:
– “Let me make it plain: fly casual.”
– “When thou art turn’d, we’ll rule the galaxy.”
– “Now we shall see the Rancor rancorous!”
– “Thou hast a back door found, thy hairiness?”
– “Thou verily dost underestimate the power of the Dark Side.”
– “A scoundrel’s life ’tis true I’ve known, yet never did I stoop so low as this.”
– “Our star wars now are ended, for a time, the song of peace bursts forth in perfect rhyme.”