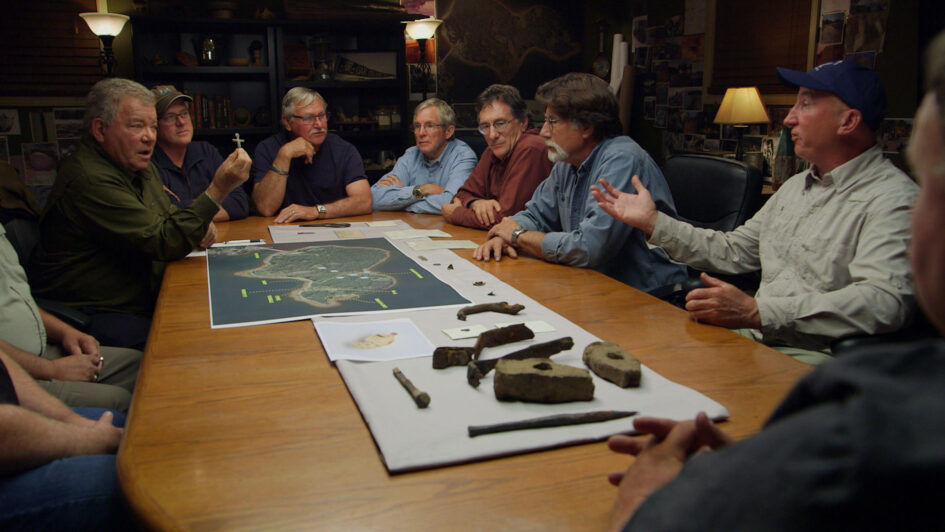 As The Curse of Oak Island winds down its seventh season, William Shatner returned to the History Channel last week with an all-new season of The UnXplained. His visit to Oak Island was an interesting cross-promotion between two television series, digging deeper into the unsolved mysteries that may have hidden dormant, underground, for 225 years…

Appearing on Drilling Down, Curse‘s after-show that explores more of the details that might not get much air time on cable’s No. 1 non-fiction series, Shatner basically interviewed the team on their own show, asking personal questions regarding the island, its history and the possible treasures that might be found there. It was definitely a good primer for new fans who might not have seen any of the show’s seven previous seasons, but it didn’t really bring anything new to fans of the show who were up to date on new episodes (with the exception of Shatner’s charm and wit).

As a Canadian, it only made sense for the well-known Star Trek actor (among other franchises) to return home to see for himself what the centuries-old unsolved mystery was all about, firsthand. It was also a good introduction for viewers to see Shat’s new show, which tends to focus on mysterious events that immediately followed, airing its second season premiere, focusing on Oak Island, naturally. Talk about your network synergy.

The Oak Island treasure hunters have seemingly been on a never-ending search for the truth, which may be even more evident than their search for unearthing unknown wealth after watching Shatner’s interview. By using scientific data, The Fellowship of the Dig has been many years in the making, much of it uncovering the remote area’s cursed history. As stated on the air, it’s seemingly true that only obsessive people can truly solve the complicated puzzles presenting themselves on the island.

Shatner’s narration over Curse‘s b-roll footage feels like just another Curse episode, but it’s Shat’s crew of resident experts giving their analysis while exploring the story, that truly makes The UnXplained feel different and worthwhile. I do like seeing a different perspective on the varying theories, but since both shows are produced by the same studio, Prometheus Entertainment, there wasn’t any chance either one would contradict the other.

The UnXplained is more enjoyable when breaking down “bigger” stories, like the 225-year-old mystery, instead of highlighting little-known smaller events that may have only happened to a couple of people. Oak Island was the perfect topic. I was shocked to finally learn about a few supernatural elements taking place there and wish they could have been explored a little more.

For the first time on any TV show, Dan Henskee detailed the time when he was possibly possessed by the spirit of a passed priest from the island, who had his throat cut… possibly a Templar spirit from beyond the grave? And Fred Nolan’s belief that the ravens on the island were possessed by the souls of former slaves who actually buried the treasure and flood tunnels was especially interesting. The supernatural presence of a creature with glowing red eyes has been reported by multiple eyewitnesses and a string of Bermuda Triangle-type of bizarre anomalies taking place between Oak Island, Frog Island and Apple Island was also neat to finally learn about, not to mention the Lagina Brothers’ personal reports of strange noises made by creatures in the dark…

I still wish UnXplained would explore a variety of mysterious events taking place in outer space, which is right in Shatner’s wheelhouse, but until then, we’ve got all-new episodes to enjoy.