Wish Upon Gets PG-13 Horror All Wrong 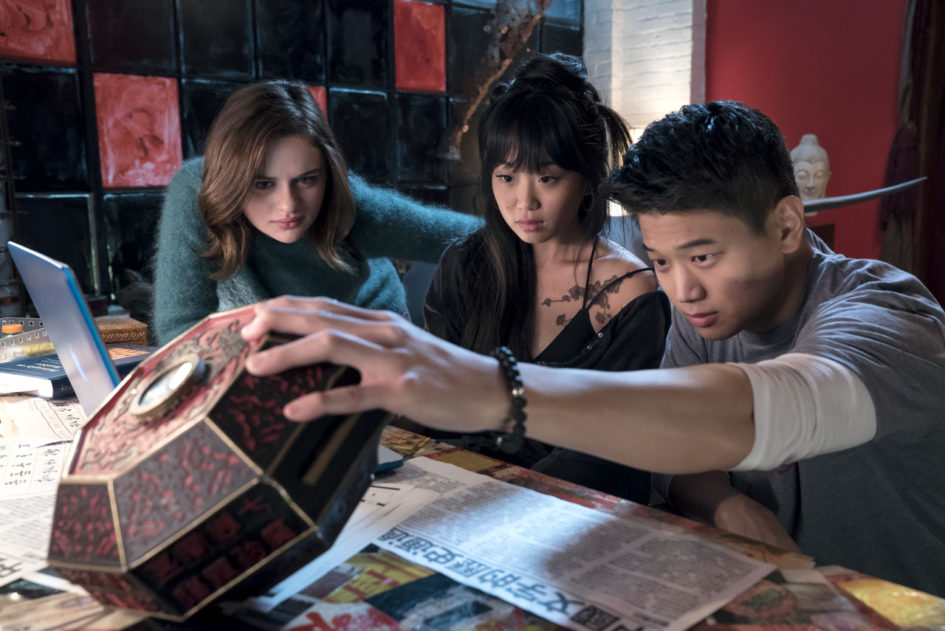 Oh, wow. I just don’t know where to start. First of all, I try to be very fair when I review movies. If a film is being marketed to young pre-teens, I try and remember that as I am watching. Wish Upon is very much a pre-teen movie. Yes, I know it’s rated PG-13 and technically 8-year-olds shouldn’t be watching it, but it’s very much a film for middle-school kids. If I look at it through that lens, I can understand why the laughably poor plot might not matter that much.

So, the premise is that Clare (Joey King) is is a 16-year-old who just happened to see her mother hang herself when she was very young. Her father’s (Ryan Phillippe) job seems to be that of a junker, much to Clare’s embarrassment. Obviously, this means she isn’t exactly wealthy, either. She is picked on by her classmates and in general, Clare just isn’t happy. Her father finds a mysterious box on one of his junking trips and gives it to her as a birthday gift. The box grants seven wishes, but each wish requires a blood sacrifice.

The premise is solid “teen horror.” A play on the old “Monkey’s Paw” story we all read in junior high, there is no reason this film shouldn’t have been at least watchable. Unfortunately, the execution is just a comical mess. The wishes Clare chooses to make are so pathetic that I quickly lost interest. She had the power of the cosmos at her hands and she is wasting wishes on fleeting high school popularity and that her dad would be more cool. Seriously… one of the wishes is that her dad would be more cool. Let me put this in perspective for you: She decided that the possible death of someone else she is close to was worth her father not embarrassing her in public. Think on that for just a few seconds. She doesn’t wish to be the next big pop star or for a billion dollars… NOPE. Most popular girl in high school. That’s as big as her brain can think. Her mother, who commits suicide at the beginning of the film, yeah that’s nowhere near the top of the list of things she might wish she had. The writing is so terrible, I really can’t focus on any other aspect of the film. It was amazingly bad writing.

The best I can say for this movie is this: Perhaps back when I was a young girl, this might be a movie I’d be interested in watching with a bunch of my friends. Even back then, we would have wasted no time thinking, “Why isn’t she wishing to be the next Katy Perry?” It is worth noting the film has a few fun cameos that spice things up. Shannon Purser, from Stranger Things, makes an appearance as Clare’s friend. Jerry O’Connell pops up too, and there are other little things to look for. In my opinion, the film obviously sets itself up for a part two, but I really can’t see that happening.

I give Wish Upon two stars because I can see young horror fans watching and enjoying this film, and only for that reason. Parents, I do find this movie safe for children between the ages of 8 to 11, depending on their tolerance for horror, of course. There is not that much blood and no sexual scenes, besides a kissing scene that is very tame. So, this might be a safe pick for the young horror fan in your life.

Wish Upon is now playing in theaters, please check local listings for times.