The Wolf Among Us: Episode 4 – In Sheep’s Clothing 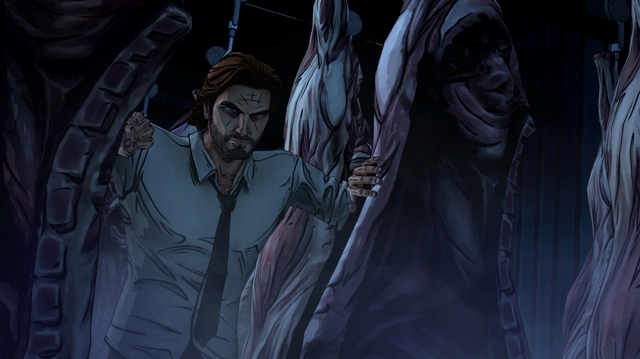 Inching toward wrapping up its first season, The Wolf Among Us sets up a fierce and final showdown for its characters… although nothing major happens in this next-to-last episode to set it apart from the rest.

Episode 4, In Sheep’s Clothing, continues Sheriff Bigby Wolf’s quest to solve a murder mystery and bring a killer to justice. While Bigby definitely throws himself into his job, sometimes he goes a bit too far (and his body suffers for it). Picking up from Episode 3, Dr. Swineheart tends to Bigby’s battle wounds and offers a warning: Silver bullets have practically destroyed his internal organs, threatening long-term toxicosis. Per doctor’s orders, if Bigby takes another silver bullet anywhere near his heart, he will die. That doom-and-gloom scenario doesn’t slow him down, but it probably should.

New characters are introduced (The Jersey Devil is one) and storyline roadblocks prevent the heroes from reaching their goals (including a teleporting door, leading to the final boss). Ichabod Crane has been kidnapped and the Magic Mirror is broken that otherwise could help solve the mystery. And for once, Snow White is worried about Bigby, finally showing some emotions for him. All of this sets up a final showdown between Bigby and the bad guys (The Crooked Man and Bloody Mary).

I was intrigued by The Jersey Devil character. I need to see more from this cranky, crooked creature. Character arcs are explored in this episode, which explains why it feels a little slow. Bigby is almost ALWAYS rude to Woodsman, so the few times they’re civil toward each other is a rare joy.

As usual, six out of the game’s seven achievements are story based with only Master Librarian being missable. You may need to replay the episode a few times to unlock all three Book of Fables, which may be missable. With some extra planning, you may be able to get all three simultaneously (like I did).

Looking ahead to Episode 5, Snow has become a stickler for following the rules. All Fables who don’t mask their appearance and revert to their true form will be shuttled off to The Farm. Where, exactly, is The Farm? And what, exactly, happens there? I’m looking forward to learning more about it.

Strength: A compelling storyline keeps introducing great characters.
Weakness: Nothing major happens in this episode, building for the boss battle.
WTF Moment: Lines of dialogue don’t always match up with the game’s subtitles.

Notable Quotes:
– “The wolf is coming.”
– “These lips are sealed.”
– “Seems your dog wants a biscuit.”
– “Who gets loans at a pawn shop, anyway?”
– “Oh, please. I could do this with my optic nerves severed.”
– “Sometimes, we have to find our way through life on our own.”
– “It shouldn’t be that big of a shock I won’t take an ass-hair coat.”
– “You know what they say: Centuries of marriage come with centuries of baggage.”