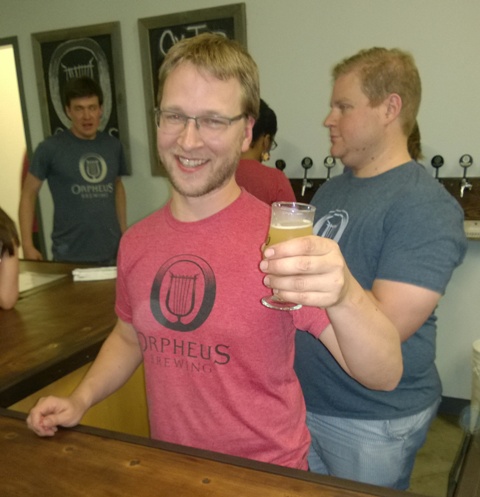 Per Matt
On Memorial Day, Orpheus Brewing opened its doors for the very first time. The microbrewery was packed with many Atlanta craft-beer aficionados who sampled the brewery’s sour and saison beers and toured the facility. I just happened to be in town for the weekend’s festivities and visited with President and Brewmaster Jason Pellett for my Beer with a Brewmaster column. We discussed opening a brewery along the Atlanta BeltLine, delved into the mythology behind the name and explored the meaning behind “‘Don’t look back.'”

How did you get started in the brewing industry?
– “I started homebrewing, 10 or 12 years ago. When I drink beer, I only drink good beer. I think I got into it because I was cooking everything from scratch… I was doing all my own bread and curry pastes and it just didn’t make sense to not make my own beer. I was in college and did it a few times. It’s an expensive hobby. I got a little more into beer through the years and then met my fiancée, Leslie, six years ago. Somehow, the thing we started to do together was to go to beer bars and breweries and it got kind of obsessive.”

“In my background, I have a Masters in orchestral trumpet performance. So, I get obsessive about things. You can’t sit in a practice room for 12 hours playing the same 16 notes over and over if you’re not that kind of person. I got that way about beer, learning all about it and hanging out at places like the Porter, getting to know Nick Rutherford and Molly Gunn — husband and wife owners of the Porter — talking about all the different flavors of beer that I wanted to find, but never could. So, I started brewing again. From pretty early on, it was just a fantasy, but I treated it like it could be an actual brewery. I didn’t want random beers. I wanted it to taste different, but you could tell it was from the same brewery… kind of like different songs from the same band.”

What was your very first homebrewed beer?
– “Ten or 12 years ago, I was mainly drinking British beers. This was the only beer I ever did that was based on a recipe I didn’t come up with. It was like a modified Hobgoblin clone. When I started brewing again, I don’t remember what the first batch was, but I remember trying to do some sours, throwing some bacteria in some beer.”

How did the individuals come together to form the brewery?
– “Five or six months after coming up with the Orpheus name, Molly Gunn was approached by an old classmate. Andrew Lorber had started a craft-brewery investment fund and wanted to get out of what he was doing before. She mentioned Orpheus to him and he wasn’t interested — for good reason — because I was just a homebrewer with a name. I spent just a few days, trying to write a proposal before he came into town and gave that and my beers to Molly. He met with her, tried the beers and read the proposal, met with the microbreweries and he called me the next day. After we were working together for a month or so, Molly thought of another classmate — Will Arnold — who might also be interested in getting involved. We started talking and that’s how the three of us got to know each other. Around the end of that year, we decided it makes more since if we’re partners in this, instead of just them backing me. It’s hard to do something like this alone.” 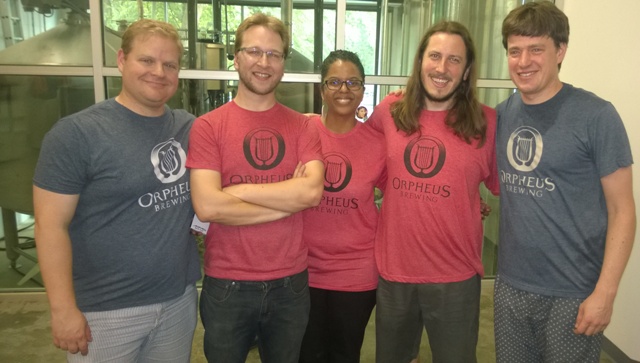 How did you come up with the Orpheus name?
– “I grew up as a trumpet player and there’s a jazz standard — an old bossa nova — called Black Orpheus. It’s a great song, but even before I knew the song, I had seen it written. Every time I flipped past it, there was this momentary thought: ‘That’s a bad-ass sounding word.’ I didn’t know the mythology, it just sounded cool for many years. Finally, I looked it up. That mythology is cool. He’s supposed to be the greatest musician and poet in ancient Greece.”

What is the story behind the phrase, “Don’t look back?”
– “There’s a cool story where on Orpheus’ wedding day to Eurydice, Eurydice was bit by a serpent and killed. He’s distraught and wanders the world for three years, singing and mourning. The power of his music is so strong, it can actually move inanimate objects. One day he was singing and a stone moves out of the way. He walks into this tunnel and it’s the entrance into the underworld. Eventually he meets Hades and he’s able to convince Hades to let Eurydice to come back, but it’s on the condition that on the way out, he doesn’t turn around to make sure she’s behind him. He just has to trust that she’s there. It’s kind of a long journey and they’re almost out, but he can’t take it anymore. He turns around and there she is, then she disappears. That’s why our tag line is: Don’t look back.”

It sounds like you’re focusing on sour beers. Is that correct?
– “We have a few focuses. We are doing lots of sours and saisons, but also besides the seasonal IPAs, we’ll be doing hop experiments. We are going to be doing a lot of hoppy beers. And then we have 3,000 square feet of barrel-aging space… so, lots of barrel-aged beers.”

Can you preview your upcoming Lyric Ale?
– “Lyric Ale won’t come out until late summer because we can’t get the hops until then. The point of that was to do a hoppy beer that I really liked the hop character of. I felt like there should be a beer that highlighted the hops instead of getting in the way of them or contrasting with them. I really wanted to go for a juicy, fruity hop flavor combined with a dry malt — more wheaty and bready than caramely. That has the philosophy of all our hoppy beers: Just let the hops shine.” 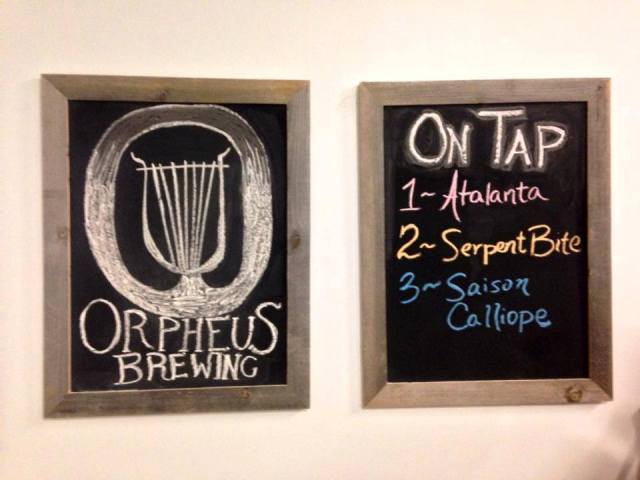 Do you see a trend of breweries creating really hoppy beers?
– “Hoppiness goes beyond a trend. For years, IPAs have been the No. 1 selling craft-beer style, with no real sign of letting up. A few of the things that I’m doing are becoming trends: the sour-mashed fruit beers have exploded since I started doing them. I ferment with a saison yeast, but in a lot of ways, what I’m doing is like what’s exploding in Florida, it’s called a Florida weizen (Hefeweizen), which is like a fruited berliner weizen.”

Is Atlanta ready for a new brewery?
– “I haven’t checked in the last few months, but last time I looked, Georgia is still 49th in the U.S. for breweries per capita. So, there are a number of new Georgia breweries, but we’re still well behind the national average. We’re also well behind the national average in what percentage of craft beer drunk is produced in the state. You contrast that with the fact that we have some of the greatest beer bars in the country. It’s not that people around here aren’t ready for the beer, it’s just not enough made.”

How did you pick this location for the brewery?
– “We really wanted something along the BeltLine and this park. There’s only a limited number of spaces that are actually ideal for a brewery, infrastructure wise. This was big enough, it had dock doors… when we got here, it was basically a concrete cave. Of all the places we looked at, the location’s great, right on Piedmont Park, it seemed like it needed the least work and it’s nice and big.”

When will your tasting room and tours be open to the public?
– “The first week of June. We’re planning on being open Wednesday through Friday, 6pm to 8pm and Saturday 2pm to 4pm.” 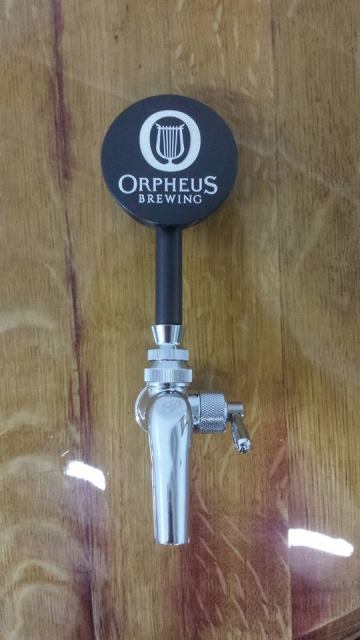