The Wolf Among Us: Episode 5 – Cry Wolf 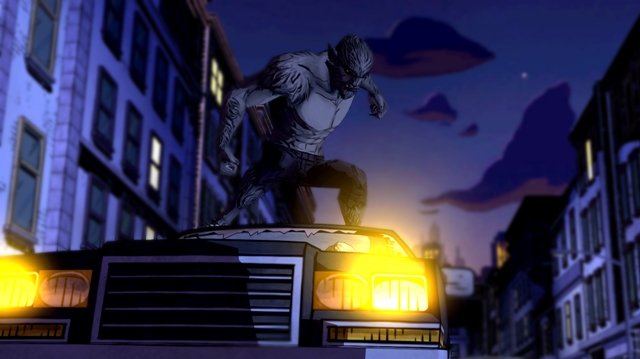 Per Matt
The Wolf Among Us wraps up Season 1 with Episode 5: Cry Wolf. Will Sheriff Bigby finally bring justice to the rough-and-tumble city of Fabletown or will it remain a lawless wilderness for Fables young and old?

The season finale picks up with Bigby Wolf having a nice heart-to-heart conversation with the Crooked Man, whose calm demeanor coats an incredible evil inside. Is this old man really the omnipresent force that’s corrupting and killing so many Fables throughout the town?

After the mediation session breaks down, the killer is revealed, but that doesn’t stop a battle royal from breaking out. Naturally, it’s time for the Sheriff to take care of business, which leads to an epic car chase throughout the heart of New York City. After catching his prey, Bigby faces off with Bloody Mary and their battle is brutal. Bigby has a serious wolf-out that would make Teen Wolf super jealous. Finally confronting The Crooked Man, Bigby brings his prisoner in for a trial.

Will the Crooked Man talk his way out of the death penalty or will justice be served cold? The decision is left to the player.

With so many great characters being featured in Season One, I don’t like to see any of them killed off, not knowing if they’ll be replaced with equally great (or inferior) ones. This is why I chose to save as many characters as possible. In the grand scheme of things, the story plays out whether they live or die, but I prefer them to survive.

When a character admits the final truth behind the Fabletown deaths, Episode 5 concludes with some open-ended questions, setting up Season 2 of The Wolf Among Us.

Cry Wolf opens with a lot of talking, followed by a lot of action and wraps up with some more talking. The player is either frantically mashing buttons to survive or wading through deep exposition. While lots of things have to happen in order to move the story forward, it seems to vary from one extreme to the next.

All the achievements and trophies are story based, with the exception of Grand Master Librarian, which has one missable Book of Fables entry. Choose your options wisely at Sheppard Metalworks or risk a replay of the entire episode.

Season 1 of The Wolf Among Us was an incredible rollercoaster ride, one which Bigby Wolf makes incredibly fun. I can’t wait to see what Telltale Games has in store for the next season!

Strength: Previous questions are answered, as new ones are presented.
Weakness: A lot of exposition wrapped around some frantic action.
WTF Moment: The Yellowbrick Roadhouse can be seen as an Easter Egg in the background. Hope to visit this location in Season 2.

Notable Quotes:
– “Discretion is our guarantee.”
– “I’ll send someone for your body.”
– “You’re not as bad as everyone says you are.”
– “Who will protect you… from the Big Bad Wolf?”
– “I’m just the sap takin’ the fall for the whole thing.”
– “You’re all rats… fleeing from one sinking ship to the next.”
– “When we suffer, we do it in silence. And the world likes it that way.”
– “I understand you have an obligation to bring me in, but brighten up a little.”
– “I’d like to say it was nice knowin’ you, but I’d like to see your insides turned out.”